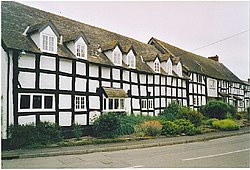 The Black and White Village Trail is a 40-mile circular tourist trail among the famed 'black and white villages' of Herefordshire. It was developed in 1987 as a means of encouraging tourists to take a closer look at Herefordshire's villages, heritage and countryside. The trail was developed mainly for travel by car, but it is also possible to make the journey by bicycle. Many coach tours now take in the trail also.

The black and white villages

Several villages in western Herefordshire are characterised by their half-timbered cottages, which are picked out in a striking scheme of oaken timbers painted black in white plastered walls. The construction of the houses was once found across the land from the Middle Ages and most famously in the Tudor period, but in Herefordshire such houses resisted being swept away as fashions changed: many of the houses seen in the Black and White villages date from the 16th and 17th centuries or earlier. They were built of green (unseasoned) timbers, with the walls between the timbers filled with lathe and plaster, the plaster painted with pigmented limewash. In later ages, the fashion was to plaster over the whole face of the house, but in the nineteenth and early twentieth centuries the owners of such houses began to appreciate the beauty in their construction and pulled off the Georgian stucco, picking out the timbers in protective black paint, and the plaster in white limewash, giving the appearance borne by the villages today.

The prevalence of these black-and-white cottages in the villages creates a very distinctive and pleasing impression, distinguishing the villages from styles found beyond their heartland.