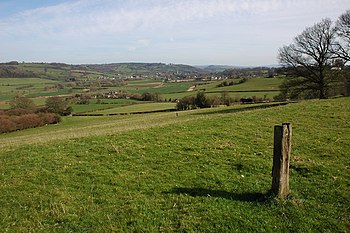 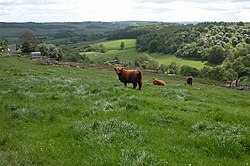 Cattle in the valley

The Golden Valley is the name given to the valley of the River Dore in western Herefordshire. The valley is a picturesque area of gently rolling countryside. It lies in the lee of the Black Mountains.

The valley can look golden indeed in the summer sunlight, but the name Golden Valley is unlikely to be from that source.

A local myth has it that Queen Victoria named the valley, but the name is recorded long before.

One suggestion is that the name derives from a confusion of the name of the River Dore with the French d'or, meaning 'of gold'. The Dore is from the Welsh language, dŵr, meaning "water". It is said that the Normans might have heard 'Dore' or 'D'Or', or it may have come through court records with that romantic confusion.[1] This theory appeared in In the film 'Shadowlands (which tells the story of C S Lewis and his wife, Joy Davidman).

The first known written reference to the 'Golden Valley' is in Samuel Rudder's 1779 History of Gloucestershire,[2] though he does not propose an origin for it, and there appears to be a reference in Issac Taylor's map dated 1777.[3]

'The Place Names of Gloucestershire', published in 1965 (University of Cambridge Press) assumes that the name is from the wealth that came from the industries of the valley,[4] but there is no source for this speculation. Rudder records that a Roger Gulden held lands in the area in the Middle Ages, so it may come from his name.

On 29 September 1849, Queen Victoria travelled from Gloucester to Swindon by train and noted the name:

"Before we came to Gloucester we passed through the beautiful valley of Stroud, so green & hilly, but soon after Swindon, all beauty of scenery faded away." (So green and not golden.)

Amongst later suggestions are that it is named form the autumn leaves of the thickly wooded slopes,[5] an observation also made by Paul Hawkins Fisher in his 'Notes and Recollections of Stroud' (1871) describing the Golden Valley: 'in autumn it is all a-glow with the bright golden tints of its beech leaves.'[6] 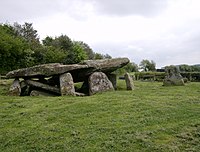 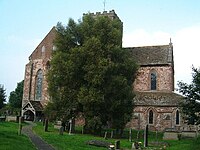 Arthur's Stone is found just outside the village of Dorstone. It is a chamber tomb from the Neolithic Period, and dates from some time between 3700 and 2700 BC. Arthur's Stone is Herefordshire's oldest man-made structure.

The majestic Dore Abbey,[7] is a mediæval former Cistercian monastery. It is a popular, a 'must see' attraction of the area and during the summer offers a programme of musical concerts. The Abbey was built between 1175 and 1220 and restored in the 1630s.

The diaries of Francis Kilvert extol the beauty of the local landscape of English river valleys sheltered by the Black Mountains between Hay on Wye and Hereford and it is Bredwardine where he is buried. Kilvert was Rector at St Andrew's church, Bredwardine until his early death in 1879.

St Michael's Church in Ewyas Harold contains a 13th-century or 14th-century effigy of a lady holding a heart in the palm of her hand.

The last remaining toll bridge in Herefordshire at Whitney-on-Wye leads to Hay-on-Wye - the world-renowned second-hand book town. This border town has tiny streets and 30 bookshops shoulder to shoulder - individual, independent, idiosyncratic - with prices from 50p to £1,000+ for rare editions.

Local legend says that Owain Glyndŵr spent his final years here; Owain vanished after the failure of his rebellion against King Henry IV and his fate is unknown but his daughter, Alys ferch Owain Glyndŵr had married John Scudamore, a Herefordshire gentleman, Sir John Scudamore, whose estate was in in the Golden Valley, and Scudamore tradition has it that Glyndŵr came here and spent his final years in hiding with his daughter under an alternative identity.

Shadowlands the 1993 film about C S Lewis, features the Golden Valley in both a painting and as an actual location. CS Lewis owned a painting of a valley which to him, as a child, appeared to be heaven.

During 2008 the Golden Valley saw the construction of the National Grid’s 122-mile natural-gas pipeline from Felindre to Tirley. The pipeline increases the volume of gas which can be transported from the new LNG terminals at Milford Haven, Pembrokeshire to the rest of Great Britain.

The Golden Valley at Turnastone