Hatfield is a town and parish in the West Riding of Yorkshire, adjacent to the border with Lincolnshire. It has a population of 16,184.[1]

The town lies close to the Lincolnshire border, and is bisected by the M18 motorway. Junctions 4 and 5 of the M18, and Junction 1 of the M180 motorway are all within the parish. Hatfield forms part of the Strafforth and Tickhill wapentake.

Hatfield (also called Heathfield historically) near Doncaster is an ancient settlement and a Palace of the Northumbrian Kingdom called Meicen (may also be referred to as Meigen).

On 12 October 633, King Edwin was killed in battle at Hatfield near Doncaster by Penda, King of Mercia. Penda was assisted in the battle by the Welsh under the leadership of Cadwallon ap Cadfan, Welsh (British) King of Gwynedd. Osric, a possible successor to Edwin, was also killed in the battle. Edwin’s son Edfrith also surrendered to Penda.

It is thought that this battle gave rise to the name of Slay Pit Lane in Hatfield where it is rumoured that the battle took place and the bodies of soldiers lay close by. 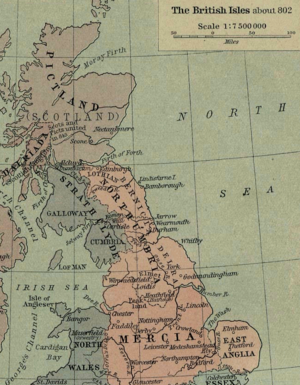 Section from Shepherd's map of the British Isles about AD 802 showing the kingdom of Northumbria. Click on the Picture to see the Meicen Capital – Hatfield (Heathfield)

Dunscroft lies on the A18 road, about six miles from the centre of Doncaster. It is located at approximately 53°34’10"N, 1°1’0"W, at an elevation of around 15 feet above sea level. There is the Sheep Dip Lane primary school. The church is dedicated to St Edwin.

The village was enhanced in June 2005 by the addition of a pharmacy.

Hatfield lies on the A18 road, about seven miles from the centre of Doncaster. It is located at approximately 53°34’40"N, 1°0’0"W, at an elevation of around 16 feet above sea level. It is served by the Hatfield and Stainforth railway station in Stainforth and Thorne.

The Domesday Survey of 1086 mentions a church at Hatfield but nothing of that building remains to be seen. The present imposing parish church of St Lawrence was probably begun in the twelfth century. The south and west doors are Norman and so is the lower part of the outer walls of the nave. The Norman pebble construction can be seen quite clearly outside.

Hatfield has numerous public houses, including The Bay Horse, The Hatfield Chase, Hatfields, The Blue Bell, The Ingram Arms and The Green Tree. The original building known as the Abbey or Dunscroft Grange was demolished in 1966–7. For the final twenty years, this building was owned by Mr Harry Lewis. The old Abbey was possibly a dormitory to Roche Abbey at Maltby. Unfortunately, it had to be demolished because the 12th-century masonry and stonework were unstable. The main school for the area is Ash Hill Academy. There is the Travis St Lawrence CofE Primary School and Hatfield Crookesbroom primary school.

Hatfield Woodhouseis a small, semi-rural village which lies on the A614 road, about seven miles from the centre of Doncaster. It is located at approximately 53°34’10"N, 0°58’60"W, at an elevation of around 16 feet above sea level.[2]

The Robin Hood Airport Doncaster Sheffield is nearby, at Finningley astride the border with Nottinghamshire. Although there has been much debate surrounding the use of the name Robin Hood in the name of the airport, the longstanding existence of the pub Robin Hood and Little John helps to justify the case for the name, as does its proximity to Sherwood Forest and also Barnsdale Forest.

Recently an application has been proposed to allow the demolition of the pub and several flats to be built in its place. This application has recently been denied due to rallies by locals to have the plans rejected. There is the Hatfield Woodhouse primary school.