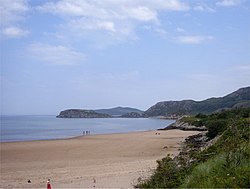 Gruinard Bay is a large, remote bay on the Atlantic coast of Wester Ross, to be found 12 miles north of Poolewe. Its shoreline is divided between Ross-shire and a detached part of Cromartyshire.

On this rugged coast, scooped and sliced by the sea and ancient ice into bays and sea-lochs, it is a bay in a half-ring with Little Loch Broom to the north-east and Loch Ewe to the south-west. In the midst of the bay is Gruinard Island. The name 'Gruinard' in the names of the island and the bay, and in two rivers entering the bay (Gruinard River and the Little Gruinard River) and Gruinard House standing by the shore.

Gruinard Bay has a number of settlements, mainly located on the eastern shore of the bay. On the south-east corner, the small hamlet of Little Gruinard stands, where the like-named river leaves enters the bay. On the western coast, the former fishing village of Laide, in the nook where the coast turns north, overlooks Gruinard Island to the north-east. Further up the west coast, the villages of Achgarve, the main village of Mellon Udrigle and the smaller crofting township of Opinan have a commanding view of the bay and Gruinard Island.

Gruinard Bay is formed from the boundary of Loch Broom to the north-east, encompasses the opening of Little Loch Broom to the east with Static Point further south, and on the west side by the Rubha Mòr peninsula, and Loch Ewe on the south-western boundary. The bay measures five and a half miles along its western shore, and four and a half miles on its eastern shore, forming a L shape.

The bay overlooks the infamous Gruinard Island, which is just over half a mile offshore, at the eastern side of the bay. The Summer Isles are visible to the north-east.

Three fast flowing rivers flow into the Bay. The Little Gruinard River, flows four miles from the Fionn Loch to enter Bay at the settlement of Little Gruinard, and Camas Gaineamhaich beach. The Gruinard River flows a similar distance from the two lochs, the larger to the east, Loch Sealga and the smaller Loch Ghiubhsachain to the west, into the bay at the western side of Camas Gaineamhaich beach. The smaller stream of the River Inverianvie, flows from the small loch, Loch à Mhadaidh Mòr and enters the bay between the two other rivers.