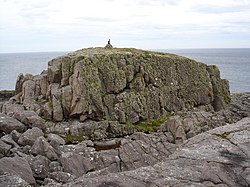 Greenstone Point at the north of the peninsula

Rubha Mòr is a remote peninsula of Ross-shire, situated on the west coast of the county. The peninsula stretches from Greenstone Point in the north to the villages of Poolewe on the southern coastline and Laide on the northern coastline. Across the Summer Isles another Rubha Mòr lies in Cromartyshire.

The principal town in the area is Poolewe, on the south-eastern flank of the peninsula. The A832 coastal road leads from Poolewe along the coast to the hamlet of Aultbea, whence a secondary B road leads west towards Mellon Charles, a former fishing and significant crofting hamlet. The A832 continues north, crossing the peninsula, until it reaches the northern coastline at Laide, where it turns south-east along the coast of Gruinard Bay, with another B road branching northward to the villages of Mellon Udrigle and Opinan on the western shore of the bay.

This Ross-shire article is a stub: help to improve Wikishire by building it up.
Retrieved from "https://wikishire.co.uk/w/index.php?title=Rubha_Mòr,_Ross-shire&oldid=56744"
Categories: