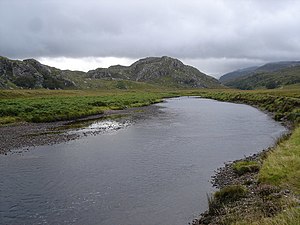 The Gruinard River is a little river of Ross-shire and Cromartyshire, which runs from the hills to Gruinard Bay.

The river has it origin in Loch Sealga, in a narrow glen south of the towering peaks of An Teallach in Ross-shire. The Srath na Sealga River is the principal feeder for the loch, but the river which emerges at the loch's foot is the Gruinard.

After a course of several miles through bleak, uninhabited, craggy landscape, the Gruinard emerges by Gruinard House on Gruinard Bay, opposite Gruinard Island.