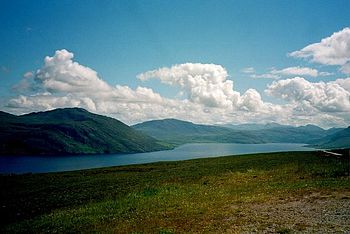 Little Loch Broom is a sea loch indenting the west coast of Wester Ross in the Highlands, a little sister to Loch Broom to the north, from which it is separated by the Scoraig peninsula. Its shores lie in Ross-shire and in Cromartyshire.

A number of the detached parts of Cromartyshire are found by its shores; Scoraig along the eastern part of the like-named peninsula is on the north shore of the loch, and the head of the loch and the shores each side likewise.

Little Loch Broom, spreads out at the foot of An Teallach and opens into the Minch. The village of Dundonnell stands at the mouth of the loch, linked by the A832 coast road to Camusnagaul on the eastern shore, halfway up the loch, and Badcaul further north.

The loch is an important wildlife habitat, and a population of cormorants often bask on the rocks jutting out of the water.

The name of the loch is from that of Loch Broom, which may be from the Gaelic Loch Bhraoin ("loch of rain showers") or a reference to the spreading yellow gorse or broom which beautifies the loch shore. 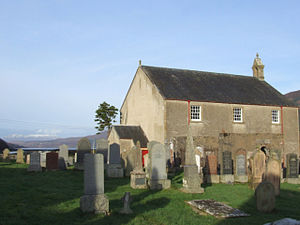 Little Loch Broom is separated from Loch Broom by the Scoraig peninsula between 2 and 4 miles wide commencing in Caileach Head.

The loch is 9½ miles long, orientated in a south-eastward direction, similar to Loch Broom, and has a mean breadth of a mile.

Two rivers flow into Little Loch Broom; the Allt Airdeasaidh empties into the Loch at Ardessie Falls and the Dundonnell River, which rises in the Dundonnell Forest 3 miles southeast of the loch and is fed by the innumerable lochans and rivers that are found in the forest.

Beinn nam Ban at 1,903 feet is at the base of the peninsula and overlooks Dundonnell to the southwest and Loch Broom to the west and south.

Lying southwest of Dundonnell, ovelooking Little Loch Broom, and Gruinard Bay and Gruinard Island, to the northwest, lies the majestic ridge of An Teallach, with 10 munros, mountains over 3,000 feet. An Teallach means "The Anvil" or "The Forge".