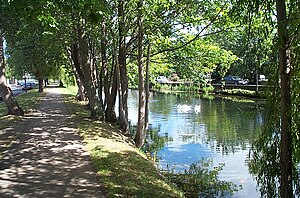 The Grand Canal in Dublin

The Grand Canal is the southernmost of a pair of canals that connect Dublin with the River Shannon via Tullamore and a number of other villages and towns, the two canals nearly encircling Dublin's inner city. Its sister canal on the Northside of Dublin is the Royal Canal. The last working cargo barge passed through the Grand Canal in 1960.[1]

There are a number of branches off the Grand Canal, some of which have been closed and of these, some subsequently restored and reopened. 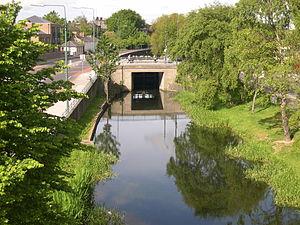 The idea of connecting Dublin to the Shannon was proposed as early as 1715,[2] and in 1757 the Irish Parliament granted Thomas Omer £20,000 to start construction of a canal. By 1759 he reported that two miles in the Bog of Allen and eight miles of canal from the River Liffey near Sallins towards Dublin were complete. By 1763 he had completed three locks and six bridges towards Dublin and was concentrating on establishing a water supply from the Morell River near Sallins. At this point the Corporation of Dublin realised that the canal could be used to improve the water supply to the city, and put up the money to complete the canal into the city. But when the canal was filled, the banks gave way and the city didn't obtain its water. By 1768, £77,000 had been spent on the project and little more was forthcoming.

In 1772 the Grand Canal Company was established by a group of noblemen and merchants, including public subscription, to ensure the future of the canal and to tackle the biggest barrier to the canal, the Bog of Allen. This was a new venture for canals. The company invited John Smeaton and his assistant William Jessop to Ireland for two weeks to advise them. Smeaton made a recommendation to skirt round the bog but to build the canal at the full height, in contrast to Omer's efforts which attempted to drain parts of the bog and build at a lower level. This was to prove an expensive mistake, although he also advised reducing the generous locks that Omer had built at 137 ft by 20 ft to 160 ft by 14 ft, which would bring about considerable savings in the total cost of the canal. 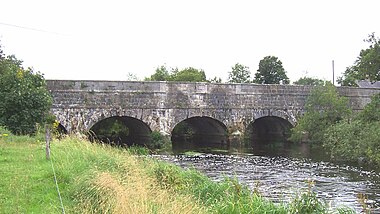 Leinster Aqueduct over the Liffey

The canal from Sallins was finally opened to traffic in 1779 and a twice-weekly passenger service from Sallins to Dublin started in 1780. The canal was extended to Robertstown in 1784, including the Leinster Aqueduct across the Liffey, constructed by Richard Evans,[3] and to a junction with the River Barrow at Athy by 1791. The circular line through Dublin from Portobello to Ringsend, where large docks adjacent to the Liffey were constructed, was started in 1790 and opened in 1796. The company had by then turned its attention to completing the link with the Shannon. Getting across the Bog of Allen took more than five years of struggle under the guidance of Jessop, who attempted to use walls of clay to support the walls of the canal. Though the canal was opened to Daingean (then Philipstown) in 1797, serious breaches occurred and Jessop was forced to abandon this method. The continuation to the Shannon then continued under the leadership of John Killaly, who succeeded in crossing another bog by carrying out drainage works for several years before construction. The work was substantially completed in 1803, but because of leakages and a dry summer the official opening had to be delayed until April 1804.

The whole work had cost in the region of £877,000[4] and it was some years before it began to make a profit, although regular dividends had been paid to shareholders. Trade increased from 100,000 tons in 1800 to double that in 1810. Revenues from passenger boats also increased to £90,000 by that date. (The novel The Kellys and the O'Kellys (1848) by Anthony Trollope includes a description of a tedious journey by passenger flyboat from Portobello to Ballinasloe.) But the long saga had prompted a rival venture, the Royal Canal, which started construction in 1790 and was finally opened in 1817 after the government had stepped in to resolve disputes between the two companies. 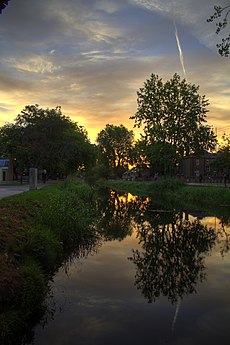 The Grand Canal in Dublin, near Charlemont

From Grand Canal Dock it passes through Ringsend and then traverses the southside, delineating the northern extremities of Ballsbridge, Ranelagh, Rathmines, Harolds Cross and Crumlin. This section is the Circular Line and has seven locks. At Inchicore can be seen the path of the original main line to the Grand Canal Harbour, the City Basin (reservoir) and Guinness brewery. Most of the route of this line now runs alongside the Red Luas Line.

From Suir Road Bridge, the lock numbering starts again at 1 as the canal heads west through the suburbs of Dublin West and into Kildare. At Sallins the Naas/Corbally branch diverts southwards while the Grand Canal continues west passing Caragh, Prosperous and Robertstown, its highest point. Just outside Sallins, the Grand Canal passes over the River Liffey at the Leinster Aqueduct. Just east of Robertstown is the location where the Blackwood Feeder used to join the canal, whilst just to the west can be found the busiest junction on the canal where the Old Barrow Line, Milltown Feeder and the entrances to the Athy & Barrow Navigation. Further west, the canal passes Edenderry, Tullamore and Rahan before it reaches the Shannon at Shannon Harbour in County Offaly. In total the main line of the canal is 82 miles with 43 locks, five of which are double locks.

In December 1792, there was a major accident on the Grand Canal. A passage boat left Dublin bound for Athy. It seems that one hundred and fifty people, many of them drunk, forced their way onto a barge, in spite of the captain warning them that the boat would capsize if they did not leave. Near the eighth lock, five men, four women and two children drowned when the boat capsized. The rest of the passengers escaped.

On the evening of Saturday, 6 April 1861 in Portobello Harbour, a horse-drawn bus, driven by Patrick Hardy, had just dropped a passenger on the canal when one of the horses started to rear. The horses backed the bus through the wooden rails of the bridge. The bus, horses and six passengers inside the bus, plunged into the cold waters and were drowned. The conductor was able to jump clear and the driver was pulled from the water by a passing policeman.

Until 1950 the Grand Canal Company had ownership of the canal, when the Transport Act, 1950 transferred the canal to Córas Iompair Éireann. This situation continued until the Canals Act, 1986 gave it to the Office of Public Works. Under the terms of the Good Friday Agreement of 1998, a new all-Ireland body called Waterways Ireland was established in 1999 and assumed responsibility for most inland navigable waterways including the Grand Canal.

The Grand Canal Way is a 73-mile long-distance trail that follows the towpath of the canal from Lucan Bridge, near Adamstown, to Shannon Harbour.[5] It is typically completed in five days.[5] It is designated as a National Waymarked Trail by the National Trails Office of the Irish Sports Council and is managed by Waterways Ireland.[5] At Robertstown, the Grand Canal Way intersects with the Barrow Way, which follows the Barrow Line extension to the canal to Athy for part of its route.[6] There is also a five-mile-long greenway between the 3rd Lock at Inchicore and the 12th Lock at Lucan, which opened in June 2010.[7]