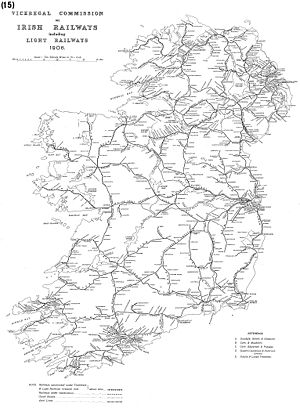 Portarlington, historically called Cooletoodera[2] (from Cúil an tSúdaire, meaning 'nook of the tanner'), is a town on the River Barrow which for the most part forms the border between County Laois and County Offaly.

Portarlington was founded in 1666, by Sir Henry Bennet, who had been Home Secretary to Charles II and to whom that King, on his restoration, had made a grant of the extensive estates of Ó Díomasaigh, Viscount Clanmalier, confiscated after the Irish Rebellion of 1641. After some difficulties, the grant passed to Sir Henry Bennet of all the Ó Díomasaigh lands in the King's and Queen's Counties, and on 14 April 1664 he was created Baron Arlington of Harlington in the County of Middlesex. So great was the anxiety of these new settlers to efface all ancient recollections in Ireland, that the Parliament of Orrery and Ormond enacted that the governor and council should be able to give new English names instead of the Irish names of places; and that after a time such new names should be the only ones known or allowed in the country. In accordance with this enactment the borough created in Cooletoodera (Cúil an tSúdaire), received the name of Port-Arlington, or Arlington's Fort.[3]

Following the failure of Henry Bennet's colony, Port Arlington was re-established with the settlement of Huguenot refugees following the Treaty of Limerick:

Unique among the French Protestant colonies established or augmented in Ireland following the Treaty of Limerick (1691), the Portarlington settlement was planted on the ashes of an abortive English colony.[4]

Fifteen or more Huguenot families who were driven from France as religious refugees settled on the ashes of Bennet's colony, and the settlement was unique among the Huguenot settlements in Ireland in that the French language survived, being used in church services till the 1820s and continuing to be taught in the town school.

... and till within the last twenty years divine service was performed in the French language. In the RC divisions Portarlington is the head of a union or district, called Portarlington, Emo and Killinard ...

The Protestant Bishop of Kildare came to Portarlington to consecrate the new French Church, 1694.[6] To the present day one of the town's main thoroughfares is still named 'French Church Street', with the original French church (1694) situated just off the market square.[7][8]

The relationship to the French influence with Portarlington is celebrated every July with The French Festival.

On the outskirts of the parish lies Lea Castle. The remnants of a great Norman castle built in 1260 by William de Vesey. It changed hands many times during its violent history, for example, it was burned by the O'Dempseys in 1284, rebuilt by de Vesey and given to the king, burned along with its town by the Scots army in 1315, burned by the O'Moores in 1346, captured by the O'Dempseys in 1422 and then lost to the Earl of Ormond in 1452, used by Silken Thomas Fitzgerald as a refuge in 1535, mortgaged to Sir Maurice Fitzgerald in 1556, and leased to Robert Bath in 1618. It was used by the confederates as a mint in the 1640s rebellion until Cromwellians blew up the fortifications by stuffing the stairways with explosives. The castle was never used as a fortification again.

Trescon Mass Rock: Just outside the town in an area known as Trescon, a mass rock (Carraig an Aifrinn in Irish) can be found deep in a wooded area.

Trescon mass rock is a stone used in mid-seventeenth century Ireland as a location for Catholic worship. Isolated locations were sought to hold religious ceremony, as Catholic mass was a matter of difficulty and danger at the time as a result of both Cromwell's campaign against the Irish, and the Penal Laws of 1695, whereby discrimination and violence against Catholics was legal. Bishops were banished and priests had to register thereafter. In some cases priest hunters were used.

The rebellion of 1798 resulted in several local men from Lea castle, being apprehended and subsequently put to death by hanging in the town's market square. A memorial in the shape of a Celtic cross with the rebels details was commissioned and erected in 1976. The memorial stands close to the perimeter wall of the French church in the market square .

Two borough minute books have survived and in the National Library of Ireland Ms 90 for 1727–1777, and Ms 5095 for 1777–1841; they reveal the limitation of freemen, and increasing control by the Dawson-Damer family, the Earls of Portarlington. (See also John S. Powell, The Portarlington maces and its borough history 1669–1841, 2011). Imperial political democratic practices were responsible for turning Portarlington into a perfectly rotten borough. The reason was to preserve the planters positions politically and economically. Below is an extract that shows that a corporation of 15 people was solely responsible for the persistent re-election of perfect strangers to parliament to represent the other 2,800 people.

"Prior to the legislative Union between Great Britain and Ireland, this borough sent two Members to the Irish Parliament; since 1800 it has returned one to the Imperial Parliament, and so close has been this corporation, that for 50 years previous to the last general election, the nominee of the Dawson family, commonly a total stranger to the borough, was always returned without a contest. According to the Parliamentary Returns of May 1829 and June 1830, the number of electors, resident and non-resident, was 15; that is, all the members of the corporation." Inquiry held 21, 23, and 24 September 1833, before John Colhoun and Henry Baldwin.

Portarlington is split by the River Barrow. With County Offaly on the south bank and County Laois on the north Bank. The town is mostly flat, with some slight street undulations. The town was partially built on the river's flood plain. Better drainage recently has resulted in fewer floodings to areas close to the town.

Crossing the river into Co Offaly, the land becomes marshy and wet with extensive peat bogs.These peat bogs are broken by some glacial hills, one such hill is called 'Derryvilla' Hill.These hills have been used for gravel and sand production.

The southern end of the town is dominated visually by another glacial hill, known locally as 'Corrig'. This hill is topped by a stone structure called the 'spire'. The spire was built the latter half of the 19th century. Next to the spire is the town's water supply reservoir. The reservoir uses the gravity afforded by the hill to supply water to the town below.

The land on the south side of town is well drained and rises slowly towards the hill of Corrig. This land is agriculturally productive and market farming is practised here.

Views from all sides of Corrig can be impressive, with spectacular views of the midlands.

1841–1881, the population of the Queen's County halved from mass emigration and starvation, in spite of the fact that the county (and most other counties) increased food production throughout the period.

Although figures for Portarlington are not readily available, it would be inconceivable to think that the town's population would have fared any better that those of the rest of the county.

Portarlington is a focal point of the Irish railway network, being situated near a junction for services to the west (Galway, Mayo), the south (Cork, Limerick, Tralee) and the east (Dublin, Kildare). Portarlington halt opened on 26 June 1847.[10]

The local economy and commerce has been dominated by the agricultural sector for many generations.

In recent years the town's location in relation to Dublin coupled with its railway services, assisted growth by attracting many people to relocate. This growth in population was a welcomed change from the near population stagnation suffered throughout Ireland for generations.

The People's Museum, situated within the Catholic Club on Main Street in Portarlington is small but holds many different exhibits ranging from local memorabilia to a Bronze Age Celtic dagger.

The town appeared in the 1993 film Into the West, a touching story about a family from Ireland's Travelling community. Portarlington, its Savoy cinema and the nearby Lea Castle appear in the film. The town is also mentioned in Christy Moore's song 'Welcome to the Cabaret', featured on his 1994 album 'Christy live at the Point'.

Outdoor pursuits of angling and hunting are available.

Extensive architectural history ranging from the Middle Ages to Huguenot and Georgian houses can be seen.