Inchicore is a village of County Dublin, now enmeshed in the conurbation. It is found three miles west of Dublin city centre. Its name is from the Irish Inse Chór, meaning 'Island of Sheep'.

The village developed around Richmond Barracks (built 1810) and Inchicore railway works (built 1846), before being incorporated into the expanding city bounds. Today, Inchicore is a largely residential area. It spreads across two townlands; Inchicore North and Inchicore South, in the Barony of Uppercross.

Inchicore grew from a small village near a marsh on the River Camac, at Inse Chaoire ("sheep island") where sheep were herded and watered outside Dublin city before market. The village developed into a significant industrial and residential suburb in the late nineteenth century, due primarily to its engineering works and the west city tramway terminus. It was incorporated by the expanding city's municipal bounds more than a century ago.

The Great Southern and Western Railway, which began constructing its network from 1844, elected to site its workshops in the then countryside at Inchicore outside built-up suburbs of Dublin. Between the years 1846 and 1848 several houses and a Workman's Dining Hall was built on Inchicore Road. As the works complex expanded in the nineteenth-century house building in Inchicore expanded with the works being the predominant employer.[1]

Inchicore has a strong association with the national transportation system; a large tram yard terminus and coachworks and the major engineering works of the Irish railway network are located here. They are still a major employer among other industries and national distribution depots.

The court-martials of all the leading figures in the 1916 Rebellion took place in Richmond Barracks in Inchcore. The nationalist poet and teacher Padraig Pearse was imprisoned here before his execution in Kilmainham Gaol on the Inchicore Road.

The River Camac enters Inchicore flowing northeast from the Landsdowne Valley in Drimnagh. It flows east through Inchicore, and on through Kilmainham and under Bow Bridge, falling into the River Liffey under Heuston Station. Much of its course is now culverted and covered by buildings.[2]

During the eighteenth century small industries, primarily paper and textiles, developed along the Camac, which at the time was characterised by water mills, water wheels and weirs. In the 18th century, mills at Goldenbridge (Glydon Bridge) were producing paper and flour. Much of the industrial archaeology has disappeared but remnants still exist in the area. Kilmainham mill still exists and much of the machinery is still in place. Although derelict, a committee has been set up with a view to securing its preservation.

Other watercourses in the area include the Creosote Stream, which passes through the railworks, and comes to the Liffey at the western end of the Gardens of Remembrance.[2]

The Grand Canal from Goldenbridge Walk

The Grand Canal was constructed in the late eighteenth and early nineteenth centuries and passes along the south side of Inchicore. The path along the canal is part of a Slí na Sláinte signposted walking route.[3] There is also a greenway five and a half miles long between the 3rd Lock at Inchicore and the 12th Lock at Lucan, which opened in June 2010.[4]

Inchicore Railway Works is the headquarters for mechanical engineering and rolling stock maintenance for Iarnród Éireann. Established in 1844 by the Great Southern & Western Railway, it is the largest engineering complex of its kind in Ireland with a site area of 73 acres.[5] Spa Road Works built trams and buses before its closure in 1977.

Goldenbridge Industrial Estate is a mixed-use area, holding a number of businesses.

Inchicore's centre, at the junction of Emmet Road and Tyrconnell Road, retains a village atmosphere. The area is served by a variety of small stores including a butcher and deli, a hardware store, ethnic stores, and two mid-size supermarkets. The village centre has several pubs, including the ancient Black Lion Inn, and several restaurants and take-aways. A brewery has also opened in the area.

The parks in the area include Grattan Crescent Park and Jim Mitchell Park, which hold playgrounds, as well as Turvey Park, and the park grounds adjoining the Mary Immaculate Roman Catholic Church. To the south, there is Lansdowne Valley Park.

The Irish National War Memorial Gardens, containing a monument designed by Sir Edwin Lutyens, lies just to the north of Inchicore; there is an Inchicore entrance on Con Colbert Road. It commemorates the fallen Irish of the Great War. Official record books held in museum buildings there are inscribed with the names those who gave their lives. The gardens are also accessible from the South Circular Road, en route toward Phoenix Park, which can be accessed by crossing over Islandbridge (Sarah Bridge).

There is a museum at Richmond Barracks, reopened in May 2016 at the centenary of the Easter Rising. Prisoners were taken to Richmond Barracks for processing after the surrender of the insurgents in 1916. Nearby Kilmainham Jail, now a national museum, was the scene of the execution of leaders of the Rising. The Irish Museum of Modern Art, housed in the Royal Hospital Kilmainham, is also nearby.

The surviving three buildings of the Barracks (formerly the recreation rooms) are in the process of being conserved. Building one has been completely refurbished as the atrium to the new Primary Health Care Centre and the gymnasium has received funding for its restoration ahead of the 1916 centenary celebrations.

Goldenbridge Cemetery, accessible via guided tours from the nearby Richmond Barracks, was the first dedicated Roman Catholic cemetery in Ireland opened after Roman Catholic Relief Act of 1829. 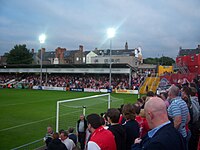