Haywards Heath is a town in Sussex, 12 miles north of Brighton and 15 miles south of Gatwick Airport. It is thus in the midst of the county – nearby towns include Burgess Hill to the southwest, Horsham to the northwest, and Crawley and East Grinstead to the north. It is a commuter town and many of the residents commute daily by rail to London, Brighton, Crawley or Gatwick for work.

The name Hayward comes from Old English, meaning an official who protected hedged enclosures from wandering livestock.[1] There is a local legend though that the name comes from a highwayman who went under the name of Jack Hayward and haunted the heath hereabouts.[2]

Haywards Heath had an early place in the Civil War.[3] Early in December 1642, the first year of the war, the Sheriff of Sussex (Sir Edward Ford) advanced with Royalist troops towards Lewes from Chichester. He was intercepted in Haywards Heath by local Parliamentarians and defeated. This though was the Haywards Heath as open heathland, before a town had been founded.

Haywards Heath as a town is a relatively modern development. Following the arrival of the London & Brighton Railway in 1841, its size has increased considerably. Haywards Heath railway station opened on 12 July 1841 and served as the southern terminus of the line until the completion of Brighton station on 21 September. The position of Haywards Heath, and its place on both this railway and near the main road (the A23) between London and Brighton, enables it to function as a commuter town, with many residents working in London, Brighton, Crawley and Gatwick Airport. 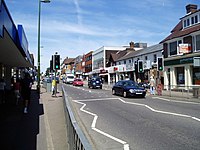 In the 1920s a scheme was launched to help families on low incomes to become self-sufficient, resulting in the building of Franklands Village in the 1930s.

In the 1960s and 1970s, two light industrial estates were built. Office development has lately resulted in the town being a regional or national centre for a number of national companies and government agencies.

The parish church is St Wilfrid's.

Churches in Hayward's Heath include:

Housing in Haywards Heath has been expanded significantly in the last ten years due to the creation of Bolnore Village, located to the southwest of the existing town. Planning permission was first granted in the late 1990s for 780 new homes on a greenfield site and the first house was completed in October 2002. The village is being built in stages and is not just houses; there are shops and commercial units too.

The decision to grant planning permission for Bolnore Village was somewhat controversial, since the Ashenground and Catts Woods on that site formed a Site of Nature Conservation Interest (SNCI).

In 2008, local residents won a bid to set up and run their own primary school for the village.[4] The new school opened in September 2010 (after operating on a temporary basis at St Wilfrid's CE Primary School since September 2009). The school building has strong green credentials, having achieved BREEAM excellence status by adopting technologies such as a living sedum plant roof and a ground source heat pump. The school has a strong environmental ethos, including a forest school programme in its curriculum through which pupils can explore the local woodlands. 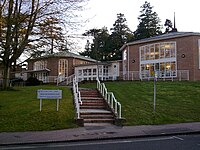 The library in Haywards Heath

"Town Day" is celebrated in early September each year including fireworks in the evening at Victoria Park.