Dinas Powys or Dinas Powis is a large village in Glamorgan which takes its name from the Dinas Powys hillfort that dates from the Iron Age. The village is 5½ miles south-west of Cardiff and conveniently situated on the A4055 road Cardiff to Barry main road. It is generally regarded as a pleasant dormitory village for Cardiff commuters since the city has expanded with widespread development around the Cardiff Bay area.

Despite the addition of several housing developments over the past fifty years, the old village centre of Dinas Powys still has a mostly unspoiled and almost rural feel, retaining a large village common and a traditional village centre complete with a post office and a range of small independent shops, public houses, restaurants and community facilities. In addition there are shops, garages, small supermarkets, doctors' surgeries and a Vets on the main Cardiff Road and a selection of shops on the Murch estate including a post office and a pharmacy.

The Neolithic and the Middle Ages

The Dinas Powys area has been populated since prehistoric times. The most ancient artefact found in the area is a Neolithic stone-age axe-head, discovered by P. W. Brooks in 1949 and now displayed in the National Museum Cardiff.

The village features substantial remains of a Norman castle and the adjacent Cwm George was the site of the celtic hill fort from which the village takes its name.[2] The hill fort site was excavated by Leslie Alcock of University College, Cardiff between 1954 and 1958[3][4] and was found to contain evidence of major wooden structures and a large quantity of high-status metalwork and jewellery.[5] There were also glass items and imported pottery dating from the sub-Roman period of between the 5th and 7th centuries. The castle was originally the seat of a Norman noble called Baron de Sumeri or Sumery,[6] but the structure went into decline around 1322 when the de Sumeri male family line came to an end.[7] 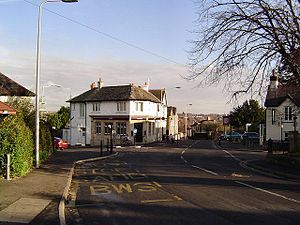 In the 11th century Dinas Powis was under the control of Sir Reginald de Sully, one of the Twelve Knights of Glamorgan. In 1591, Sir Edward Mansel of Margam wrote his historical document recording The winning of Glamorgan and recorded:

To Sir Reginald de Sully he (Sir Robert Fitz Haymon) gave the castle and town to be called Sully with the Manor of it, and the Manors of St Andrews and Dinas Powys for his Granary and provisions. This Sir Reginald bestowed much land in fee frankliege to his men and came to be a man of wealth and fame. He had at Sully besides his Castle a fair Manor house built after a new manner, where he did live the most of his time, which house as well as the Castle was broke down by Owain Glendowr[8]

Later in The winning of Glamorgan Mansel records:

The Lordship of Llantwit is described as so fertile that as Glamorgan was called the Garden of Wales was this Lordship called the Garden of Glamorgan ... and it is the flower of all the Country ... and it was very full of goodly villages and Courtly houses, most of them still in remaining. The Lord had in this Lordship a noble Castle at Dinas Powys and one at Barry, with his Court house of Llantwit and Grange house of Boverton, so that in the whole it is a most Goodly Country.

By 1833, the community of Dinas Powys barely existed, but was still larger than nearby Penarth, until Penarth together with Cogan and Llandough formed a new Town Board. However, St Andrews Major was at the time substantially larger than Dinas Powis, but even added together their population was still only 474 in total.[9]

The village population had remained almost static at about 300-400 people until the second half of the 19th century when there was an influx into this thriving rural community, including a large contingent from the West Country. The growth of the coal industry saw the first passenger train arrive in Dinas Powys on Sunday, 20 December 1898, and thereafter the population increased rapidly. The new rail link was laid at the bottom end of the Dinas Powys valley and provided a rapid link to the new docks that had been built in Cardiff, Barry and Penarth to handle the expanding coal trade from the South Wales valleys. At that time the only features below St Andrews Major were the small hamlet of Dinas Powis, the rail line, Cadoxton Brook and a number of small farms.

The new rail link provided far better communication and transport to the area making it a more attractive residential prospect and many workers from Barry and Cardiff moved into the area. As quickly as 1891, the village population had already more than doubled to 1,149 and by the turn of the century ten years later, had expanded to over 2,000. The village expanded in two ways as from the railway link towards St Andrew's Major many imposing and fine houses were built, in contrast to the 'railway suburbs' that grew up along the railway, near the current area of Eastbrook, where the new housing was of more modest proportions.[10]

Just a few years after the railway was constructed, the main Cardiff Road was developed over the previous unmetalled trackway that followed the route of the railway line. This provided a further burst of population growth and house building.

In the 20th century

A corner of the village common land was sold to the Barry Docks and Railway Company for the sum of £160. The then Lord of the Manor and ex-military survivor of the First World War, Major General Henry Lee donated an additional sum of £30 and in 1935 the combined fund was used to upgrade the small green in the centre of the village, known locally as the Twyn, with a War Memorial.[11] 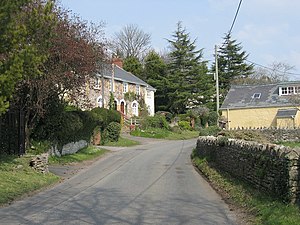 Dinas Powys village is spread across the full width of a traditional wooded valley, with the Cadoxton River running in the river valley.[12]

The surrounding soils within the village bounds are mostly a strong, brown, dry earth, well adapted for arable farming and the growing of grains of all kinds that contributed to the area being a mostly farming community until the modern era. The substratum under the whole area is a limestone that was likely laid down under a warm ocean at some stage in the distant past.[13]

The village has not been able to spread northwards, because there were (and still are) golf courses and protected woodlands between the village and Michaelston-le-pit. The freeholders of Cwrt-yr-Ala Estate prevented the two from merging. More recent housing development has taken place in a linear fashion either side of the main Cardiff road and in the direction of Cadoxton and Barry. Cwm George and Cwrt-yr-Ala are woodlands in the area.

It is obvious by comparing variously aged maps that over the last hundred years Penarth and Dinas Powys have spread and grown closer together. In many places the two communities are only separated by a few hundred yards and a couple of fields, although no direct road connections have been added entailing a roundabout car route of several miles via Llandough. The only existing direct road is the mediæval and winding single-track 'Cross Common Road'. Another traditional lane crossing that existed between the current site of Tesco Express and the current Erw Delyn school at Redlands Heights, Penarth was closed to through traffic following extensions to the Murch estate in the 1970s. 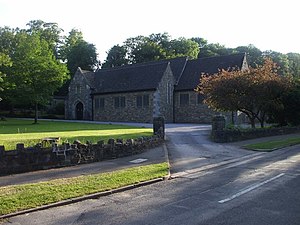 St Peter's church on Mill Road is the main Church in Wales church within the village while the Roman Catholic congregation worships at St Mary's church on Edith Road.[14] The 14th-century Norman parish church, dedicated to St Andrew is located in the hamlet of St Andrews Major, just under a mile away from the Dinas Powys village centre. Additionally there is the nearby church of St Michael and All Angels in Michaelston-le-Pit.

There are also two Methodist chapels within the village, one is a small "tin Tabernacle" in the Eastbrook area, at the top of Chapel close, opposite Eastbrook Railway station; the larger Methodist Church backs on to Station Road where, until May 2008 its front entrance was, the entrance has now been relocated to the access off Mount Road, on the edge of the common. Dinas Powys Baptist Church meet in the Parish Hall on Britway Road, and Bethesda Chapel is on Fairoaks. 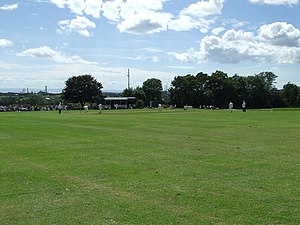 Cricket on the Common, Dinas Powys

The extensive recreation area at the village Common, administered by Dinas Powys Community Council, is home to several established sports teams. The first Rugby Football was played on the Common at Dinas Powys, in 1882.[15] It is said that a group of young farm workers challenged a group of players at the new Gwalia Brickworks and thus history was made. The Dinas Powys Rugby Club located on the common, also caters for several skittles teams. Organised sports are also played on Parc Bryn-a-don and the Murch Playing Fields within the village. 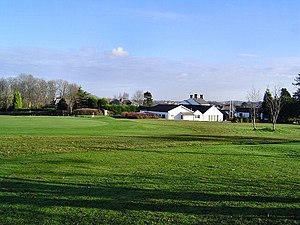 Dinas Powys Football Club is the local association football team. Dinas Powys Golf Club was founded in 1914 and is considered to be one of the finest courses in Wales, with views over the city of Cardiff and Cardiff Bay. The tennis club and coaching is also considered one of the finest in the Vale of Glamorgan. Dinas Powys Cricket Club were established in 1882. They field a 1st, 2nd & 3XI side in the Welsh Club Cricket Conference, playing their home league matches at Parc Bryn y Don, and also run a Midweek League side and a Sunday friendly side, playing home matches on the spiritual home of the club, Dinas Powys Common. The club also has a healthy junior section, running sides at Under 9, Under 11, Under 13 and Under 15

There has been an active branch of the Pony Club in the village since 1975. There are many voluntary organisations active within the village and available for the active participation of residents, including a large Scout group. 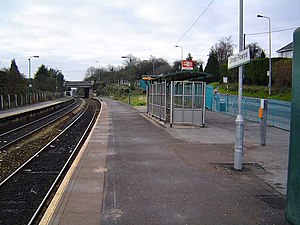 The village has two railway stations, one at either end of the village with Eastbrook station at the Cardiff end and Dinas Powys station at the Barry end. Both stations are on the same Vale of Glamorgan line. Monday to Saturday daytimes there is a fifteen-minute frequency northbound to Cardiff Central and beyond. Southbound three trains per hour to Barry Island, plus an hourly service to Bridgend via Rhoose.