Lavernock is a hamlet in Glamorgan, lying on the coast seven miles south of Cardiff between Penarth and Sully, and overlooking the Bristol Channel.

Marconi and the first radio messages across open sea 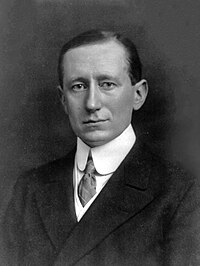 Following overland tests at Salisbury Plain during March 1897, on 13 May 1897, the Italian-born and recently British-based inventor, best known for his development of a radiotelegraph system, Guglielmo Marconi, assisted by George Kemp (who was a Cardiff-based Post Office engineer) transmitted and received the first wireless signals over open sea between Lavernock Point and Flat Holm island.

The very first message transmitted in morse code was "ARE YOU READY". This was immediately followed by "CAN YOU HEAR ME" to which the reply was "YES LOUD AND CLEAR". The morse recording slip for the first message is on display in the National Museum of Wales.

Following the initial opening exchange there followed detailed technical messages in both directions indicating each end's equipment settings and receiving sound levels. Marconi indicated that he was using a 20" spark on his equipment. 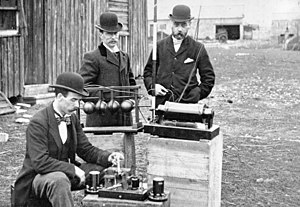 The successful test followed several days of trials and failure while adjustments were made to aerial length. Extensive trials were carried out over the remainder of the week in various weather conditions and with different settings on the equipment at each end. Marconi benefitted from the active encouragement of then Mr William Preece (later Sir William Preece) who was Engineer-in-Chief of the Post Office and had himself transmitted radio telegraph morse signals across Coniston Water eight years earlier. Preece had been previously acted as a consultant to the Bristol Corporation's Electricity Department between 1883 and 1893. The Post Office engineers, including George Kemp who kept a detailed diary of these events, had been experimenting for some months at Lavernock Point. Kemp recorded the following in his diary of the experiments:

"Mr Marconi’s apparatus was set up on the cliff at Lavernock Point, which is about twenty yards above sea-level. Here we erected a pole, 30 yds high, on the top of which was a cylindrical cap of zinc, 2 yds long and 1 yd diameter.

Connected with this cap was an insulated copper wire leading to one side of the detector, the other side of which was connected to a wire led down the cliff and dipping into the sea. At Flat Holm Mr Preece’s apparatus was arranged, the Ruhmkorff coil also giving 20 in sparks from an eight-cell battery.

On the 10th May experiments on Mr Preece's electro-magnetic transmission method were repeated, and with perfect success.

The next few days were eventful ones in the history of Mr Marconi. On the 11th and 12th his experiments were unsatisfactory — worse still, they were failures — and the fate of his new system trembled in the balance.

An inspiration saved it. On the 13th May the apparatus was carried down to the beach at the foot of the cliff, and connected by another 20 yds of wire to the pole above, thus making an aerial height of 50 yds in all. Result, The instruments which for two days failed to record anything intelligible, now rang out the signals clear and unmistakable, and all by the addition of a few yards of wire!"

Marconi's new equipment was therefore used in conjunction with that already adopted by the Post Office. The initial tests were so successful over the three and a third mile stretch of water that it was quickly decided to relocate the telegraph equipment from Flat Holm to Brean Down Fort, near Weston-super-Mare increasing the distance to nearly ten miles from the Lavernock Point transmitter.

Following these successful trials, Marconi subsequently vested his new patent rights in his 'Wireless Telegraph and Signal Company', which unfortunately prevented any further co-operation with the Post Office engineers. However George Kemp immediately resigned from his Post Office position and joined Marconi's new company as head of engineering development.

In 1948, to mark the 50th anniversary of the experiments, a bronze plaque was unveiled by the Cardiff Rotary Club inside the courtyard of the recently closed church of St.Lawrence, Lavernock, commemorating the historic radio transmissions over nine miles of open sea. The small stone hut that Marconi used to contain his experimental radio telegraph equipment still stands on the cliff edge at the end of the lane near Lower Cosmeston farmhouse.

The Bays of Lavernock

From the late 1890s until 1968 Lavernock and the nearby bays of St Mary's Well and Swanbridge (with its low tide walk out to Sully Island) were popular and busy holiday locations for regular day trippers from the South Wales Valleys, Newport, Cardiff, Penarth and Barry and the beaches were packed with visitors on most weekends and Bank Holidays throughout the summer. The hundreds and sometimes thousands of holidaymakers were served refreshments by an ice cream parlour, two busy cafes, the Golden Hind public house and the three star Lavernock Bay Hotel. Very few visitors arrived by car until the 1960s with the majority travelling by the half-hourly steam trains that stopped at Lavernock and Swanbridge Halts on the busy Taff Vale Railway Line en route to Barry Island.

Lavernock started settling back to quiet seclusion in the late 1960s when the railway line closed down under the Beeching Axe. Some modern day trippers arrived by car, to the degree that the lanes and the Swanbridge car park were often jammed, but visitor numbers had dropped off to such a degree that falling profit margins meant all the food outlets, the Golden Hind pub and eventually even the Bay Hotel closed down and the decline was accelerated even further.

Lavernock Point is a headland on the Glamorgan coast, overlooking the Bristol Channel with views across to the Somerset Coast.

A line drawn between Lavernock Point and Sand Point, Somerset marks the lower limit of the Severn estuary and the start of the Bristol Channel. Because of the extreme tidal range there are very strong currents or rips close inshore to the point with speeds that exceed 7 knots for several hours at each tide.

Monkstone Lighthouse is located in the Bristol Channel near Lavernock Point. A lighthouse here was established in 1839, but the original iron structure was replaced in 1993. The current lighthouse, which is solar powered and operated by Trinity House, comprises a masonry tower strengthened by vertical and horizontal wrought iron bands, with a red glass-reinforced plastic tower on top.[1] 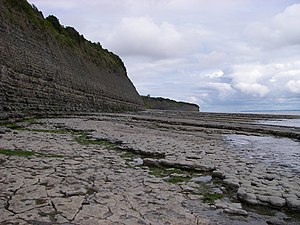 The geology-rich strata of Lavernock cliffs

Lavernock railway station was sold off and long sections of the old railway track bed are still open from the Fort Road bridge as far as Lower Penarth as a rural greenway and cyclepath, however the track bed in the direction of Sully is either overgrown and impassable or has been sold into private ownership.

Lavernock, St Mary's Well Bay and Swanbridge (Sully Island) can still be reached along the clifftop path from Penarth.

The old cafe car park at Swanbridge was developed as part of the newly opened Captain's Wife public house in the mid-1970s.

The Marconi Holiday Village near Lavernock Point, is run by the Lavernock Point Holiday Park and consists of chalets, fixed caravans and touring berths. The licensed Marconi Club at the holiday village is open to non-residents.

The small mediæval parish church of St Lawrence[2] is a Grade II listed building with mediæval, possibly 12th-century, origins.[3] It closed in 2008 and the church building is being restored and maintained by a volunteer group consisting of friends of the church. The group has established a charitable trust intended to maintain the structure, allowing continued access to and enjoyment of the historic building. Church services are still currently held along with occasional public open days.[4]