Newbury is the largest town in western Berkshire. It is stands on the River Kennet and the Kennet and Avon Canal, and has a town centre containing many 17th century buildings. Newbury is best known for its racecourse and the adjoining former airbase at Greenham Common.

Today, Newbury town has a population of about 32,000 (2004) and, with adjacent towns such as Thatcham, is the centre of a continuously built up area with an overall population of around 60,000. Newbury serves as the major commercial and retail centre of West Berkshire.

The River Kennet and the Kennet and Avon Canal flow through the centre of the town, while the River Lambourn partly forms its northern boundary and the River Enborne forms its southern boundary (and also the county boundary with Hampshire). Adjoining the town's south-eastern border is Greenham Common and the famous racecourse. Newbury is surrounded on three sides (north, west and south) by the Berkshire Downs. The downland to the south rises steeply out of the river valley providing scenic views, including Watership Down (made famous by the novel of the same name), Beacon Hill and Combe Gibbet. 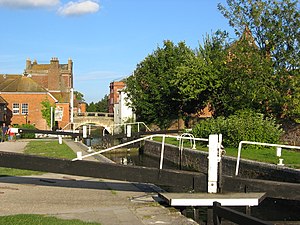 The Kennet and Avon Canal running through Newbury

The Kennet Valley has always formed an important east-west transport route. The opening of the Kennet and Avon Canal and the Great Western Railway line from London to the West Country boosted Newbury’s position on the commercial transport routes. Today, Newbury is served by two railway stations, Newbury and Newbury Racecourse, both of which lie on the Reading to Plymouth Line.

Following a similar east-west route is the A4 road from London to Bristol, historically the main route west from London. This road has been superseded as a long distance route by the M4 motorway which here runs parallel three miles to the north. The Newbury junction, at Chieveley, is Junction 13.

Newbury is at the crossroads of the east-west route with a north-south route, from the industrial centres of the Midlands to the major south coast port of Southampton. This latter route is no longer served by rail but only by the A34 road, which now bypasses Newbury to the west on an alignment partially using the old rail route.

Until the completion of the bypass, the A34 and A4 met in the town centre at Robin Hood Roundabout, a complicated gyratory system encompassing 6 approaching roads, a fire station, ambulance station, and an exit on the internal (right-hand) side of the roundabout which has to fly-over the roundabout as it heads away to the north. The major congestion this caused in the town resulted in the building of the Newbury Bypass in the 1990s, an operation heavily contested at the time between the government and environmental protestors. The road was built and finally opened in 1998. Within two months the road surface began to break up and the entire length of the bypass was eventually resurfaced over two weekends using an improved low-noise water-absorbent surface.

In August 2004, the improved A34-M4 junction 13 was re-opened which allowed north–south traffic on the A34 to bypass the roundabout completely at the M4. This junction continued to be improved, with new road markings and traffic signals completed in 2008.