From Wikishire
(Redirected from Connacht)
Jump to: navigation, search 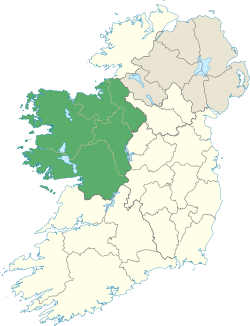 The Flag of Connaught

Connaught or in Irish Connacht or Cúige Chonnacht, is one of the Provinces of Ireland occupying the centre west of the Republic of Ireland. In Ancient Ireland, it was one of the fifths ruled by a "king of over-kings" (in Irish: rí ruirech). The province today encompasses five counties and an area of 6,867 square miles, containing a population given in 2001 of 542,547. It is the smallest of the four provinces.

The counties constituting Connaught are:

The traditional arms of Connaught are dimidiated with an eagle and an armoured arm bearing a sword, which has become the basis of the provincial flag. armed hand. The arms are recorded as those of the Province on a map of Galway dated 1651.

The province of Connaught has the greatest number of native Irish speakers of any province, between 5-10% of the population (some 40,000-55,000 folk speak Gaelic). There are several important Irish-speaking areas in the counties of Galway and Mayo, the largest such area being in the west of County Galway.

Irish speaking areas in County Mayo can be found in Iorras and Acaill. 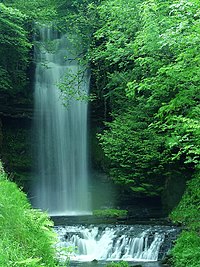 The highest point of Connaught is Mweelrea (2,671 feet), in County Mayo.

The biggest lake is Lough Corrib, north of Galway.

Killary Harbour, reckoned as Ireland's only natural fjord, is located at the foot of Mweelrea.

Connemara National Park is located within Connaught in County Galway.

The Aran Islands, featuring spectacular pre-historic forts such as Dún Aonghasa, have been a regular tourist destination since the 19th century.

Connaught derives its name from the Connachta dynasty, who claimed descent from the mythical king Conn of the Hundred Battles. The name Connachta means "the descendants of Conn". Before the dynasty was born the province (or fifth) was known as Cóiced Ol nEchmacht.

In Irish, the province is usually called Cúige Chonnacht. Cúige denotes a portion. Because Ireland had five major kingdoms, the term came to denote a fifth, meaning a territory comprising one fifth of the island. The other fifths were Ulaid, Mide, Laighin and Mumhan. Notable kingdoms such as Aileach, Brega, Osraighe and Ui Maine, never gained the status of fifths, but were recognised as powerful kingdoms within each fifth.

In Ireland, practice is often to re-Gaelicise the name from "Connaught" to "Connacht", albeit that gaelic purists insisit that Connacht, as in Cúige Chonnacht is genitive and the nomnitive name should be rendered Connachta.

The title Duke of Connaught was created in 1874 for Queen Victoria's third son, Prince Arthur, who could, after all, trace a descent from the Connachta.[1]

Enigmatic artifacts such as the Turoe stone and the Castlestrange stone, whatever their purpose, denote the ambition and achievement of those societies, and their contact with the La Tène culture of mainland Europe.

During the mid-8th century, what is now County Clare was absorbed into Thomond by the Déisi Tuisceart. It has remained a part of the province of Munster ever since.

The name Connaught arose from the most successful of the early dynasties, The Connachta. By 1050, they had extended their rule from Rathcroghan in north County Roscommon to large areas of what are now County Galway, County Mayo, County Sligo, County Leitrim. The dynastic term was from then on applied to the overall geographic area containing those counties, and has remained so ever since.

Small initials from the Book of Kells

The Kingdom of Connaught

The most successful sept of the Connachta were the Ó Conchobair (Conor) of Síol Muireadaigh. They derived their surname from Conchobar mac Taidg Mór (c.800-882), from whom all subsequent Ó Conchobair Kings of Connaught descended.

By the reign of Áed in Gai Bernaig (1046–1067), Connaught's kings ruled much what is now the province. Yet the Ó Conchobair's contended for control with their cousions, the Ua Ruairc of Uí Briúin Bréifne. Four Ua Ruairc's achieved rule of the kingdom - Fergal Ua Ruairc (956-967), Art Uallach Ua Ruairc (1030–1046, Áed Ua Ruairc(1067–1087) and Domnall Ua Ruairc (1098-1102. In addition, the usurper Flaithbertaigh Ua Flaithbertaigh gained the kingship in 1092 by the expedient of blinding King Ruaidrí na Saide Buide. After 1102 the Ua Ruairc's and Ua Flaithbertaigh's were subborned and confined to their own kingdoms of Bréifne and Iar Connacht. From then till the death of the last king in 1474, the kingship was held exclusively by the Ó Conchobair's.

Though the Ó Cellaigh's were never elevated to the provincial kingship, Ui Maine existed as a semi-independent kingdom both before and after the demise of the Connaught kingship. 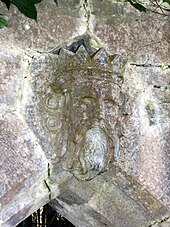 Under kings Tairrdelbach Ua Conchobair (1088–1156) and his son Ruaidrí Ua Conchobair (c.1120-1198) Connaught became one of the five dominant kingdoms on the island. Tairrdelbach and Ruaidrí became the first men from west of the Shannon to gain the title Ard-Rí na hÉireann (High King of Ireland). In the latter's case, he was recognised all over the island in 1166 as Rí Éireann, or King of Ireland.

Tairrdelbach was highly innovative, building the first stone castles in Ireland, and more controversially, introducing the policy of primogeniture to a hostile Gaelic polity. Castles were built in the 1120s at Galway (where he based his fleet), Dunmore, Sligo and Ballinasloe, where he dug a new six-mile canal to divert the river Suck around the castle of Dun Ló. Churches, monasteries and dioceses were re-founded or created, works such as the Corpus Missal, the High Cross of Tuam and the Cross of Cong were sponsored by him.

Tairrdelbach annexed the Kingdom of Mide (Meath); its rulers, the Clann Cholmáin, became his vassals. This brought two of Ireland's five main kingdoms under the direct control of Connaught. He also asserted control over Dublin.

Tairrdelbach's son, Ruaidrí, became king of Connaught "without any opposition" in 1156. One of his first acts as king was arresting three of his twenty-two brothers, "Brian Breifneach, Brian Luighneach, and Muircheartach Muimhneach" to prevent them from usurping him. He blinded Brian Breifneach as an extra precaution.

Ruaidrí was compelled to recognise Muirchertach Mac Lochlainn as Ard-Rí, though he went to war with him in 1159. Mac Lochlainn's murder in 1166 left Ruaidrí the unopposed ruler of all Ireland. He was crowned in 1166 at Dublin, "took the kingship of Ireland ...[and was] inaugurated king as honourably as any king of the Gaeidhil was ever inaugurated;" He was the first and last native ruler who was recognised by the Gaelic-Irish as full King of Ireland.

However, his expulsion of Dermot MacMurrough later that year brought about the Norman invasion of Ireland in 1169. Ruaidrí's inept response to events led to rebellion by his sons in 1177, and his deposition by Conchobar Maenmaige Ua Conchobair in 1183.

Ruaidrí died at Cong in 1198, noted as the annals as late "King of Connaught and of All Ireland, both the Irish and the English."

The Norman invasion of Ireland prevented the O'Conor (Ó Conchobair) dynasty from establishing a permanent paramouncy over all Ireland.

Connaught was first raided by the Anglo-Normans in 1177 but not until 1237 did encastellation begin under Richard Mor de Burgh (c. 1194–1242). New towns were founded (Athenry, Headford, Castlebar) or former settlements expanded (Sligo, Roscommon, Loughrea, Ballymote). Both Gael and Gall acknowledged the supreme lordship of the Earl of Ulster; after the murder of the last earl in 1333, the Anglo-Irish split into different factions, the most powerful emerging as Bourke of Mac William Eighter in north Connaught, and Burke of Clanricarde in the south. They were regularly in and out of alliance with equally powerful Gaelic lords and kings such as Ó Conchobair of Síol Muireadaigh, Ó Cellaigh (Kelly) of Ui Maine and Mac Diarmata (MacDermot) of Moylurg, in addition to extraprovincial powers such as Ó Briain (O'Brian) of Thomond, FitzGerald of Kildare, Ó Domhnaill (O'Donnell) of Tyrconnell. 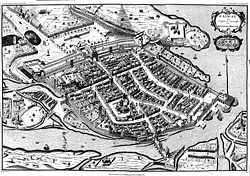 Independent from both Gael and Gall was the town of Galway, the only significant urban area in the province. After expelling the Burkes of Clanricarde, its inhabitants governed themselves under charter of the king of England. Its merchant families, The Tribes of Galway, traded within Ireland, as well as England, France and Spain till it was reckoned one of Ireland's most eminent towns. It was something of an oddity as it was ruled by a merchant middle class of elected freemen, whereas both Gaelic-Irish and Anglo-Irish lordships were inherited by those of noble blood, or violently seized. Its mayor enjoyed supreme power but only for the length of his office, rarely more than a year. Galway's inhabitants were of mixed descent, its families bearing surnames of Gaelic, French, English, Welsh, Norman and other origins. In contrast to much of the rest of the province, they were literate and multi-lingual and actively sought the protection of the English Crown. They however remained devout Roman Catholics, which displeased the Anglo-Irish administration, and later, the House of Stuart.

Connaught was the site of two of the bloodiest battles in Irish history, the Second Battle of Athenry (1316) and the Battle of Knockdoe (1504). The casualties of both battles were measured in several thousand, unusually high for Irish warfare. A third battle at Aughrim in 1691 resulted in an estimated 10,000 deaths.

All of Connaught's lordships remained in states of full or semi-independence from other Gaelic-Irish and Anglo-Irish rulers till the late 16th century, when the Tudor conquest of Ireland (c. 1534–1603) brought all under the direct rule of King James VI & I. The counties were created from c. 1569 onwards.

During the 17th century representatives from Connaught played leading roles in Confederate Ireland and during the Jacobite War in Ireland. Its main town, Galway, endured several sieges, while warfare, plague, famine and sectarian massacres killed about a third of the population by 1655.

One of the last battles fought in pre-20th century Ireland occurred in Connaught, the Battle of Aughrim on 12 July 1691.

Connaught was mainly at peace between 1691 and 1798. A population explosion in the early 18th century was curbed by the Irish Famine (1740–1741), which led to many deaths and some emigration. Its memory has been overshadowed by the Great Famine one hundred years later.

The Republic of Connaught had a brief existence in 1798 with French military support.

The Famine to World War One

Connaught was the worst hit area in Ireland during the Great Famine, in particular counties Mayo and Roscommon. In the Census of 1841, the population of Connaught stood at 1,418,859. Its highest ever. By 1851, the population had fallen to 1,010,031 and would continue to decline until the late 20th century. [1]