Cong is a village straddling the borders of County Galway and County Mayo. Its name is from the Irish Cúnga Fheichín meaning "Saint Feichin's narrows".

Cong is situated on an island formed by a number of streams that surround it on all sides. Cong is located on the isthmus connecting Loughs Corrib and Mask, near the towns of Headford and Ballinrobe and the villages of Clonbur, the Neale and Cross.

Cong is known for its underground streams that connect Lough Corrib with Lough Mask to the north.[1]

The 1111 Synod of Ráth Breasail included Cong (Cunga Féichin) among the five dioceses it approved for Connaught, but in 1152 the Synod of Kells excluded it from its list and assigned what would be its territory to the archdiocese of Tuam.[2][3] No longer a residential bishopric, Cunga Féichin is today listed by the Catholic Church as a titular see.[4] 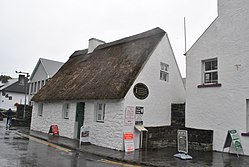 Cong was the filming location for John Ford's 1952 Oscar-winning film, The Quiet Man,[5] featuring John Wayne, Maureen O'Hara and Barry Fitzgerald. Much of the film was filmed on the grounds of Ashford Castle. The town and castle area remain little changed since 1952, and Cong's connection with the movie make it a tourist attraction. (The film is still celebrated by the local "Quiet Man Fan Club").[6]

Roman Catholic records for Cong did not commence until 1870. Church of Ireland records from the 18th and 19th centuries have survived and are held at the South Mayo Family Research Centre in nearby Ballinrobe. 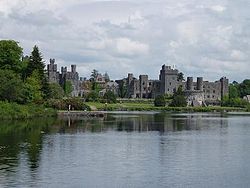 Ashford Castle
Cong is the home of Ashford Castle, a luxury hotel, which was converted from a Victorian faux lakeside castle, built by the Guinness family. Ashford Castle is a tourist attraction in its own right. Cong also features a ruined mediæval abbey, Cong Abbey, where Rory O'Connor, the last High King of Ireland, spent his last years.[7] It also is the origin of a piece of Celtic art in the form of a metal cross shrine called the Cross of Cong. The 'Cross of Cong' is now held in the National Museum of Ireland, Dublin. There is a High Cross in the village. 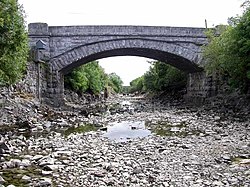 The Cong Canal, built over five years by the Commissioners of Public Works between 1848 and 1854 as a combined scheme to provide navigation, drainage and mill-power. In 1854 the Commissioners abandoned the navigation aspect of the scheme and instructed Samuel Roberts, their engineer, "to suspend the execution of all navigation works in this division of the district, and complete only such as were necessary for the regulation of the waters of Lough Mask, for drainage purposes." Now it is commonly known as the "Dry Canal"; the water level can vary between zero and 3.5 meters depending on the time of year (summer dry, winter full) and is 5 km in length. Built heritage features of the canal remain.[8][9][10][11]