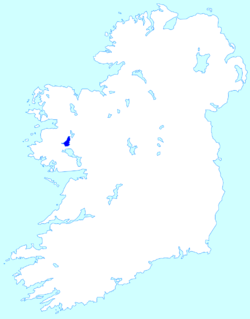 Lough Mask is a limestone lough of 20,500 acres, mostly in County Mayo, with the south-western portion in County Galway. Lough Mask is the middle of the three lakes, which empty into the Corrib River, through Galway, into Galway Bay. Lough Carra flows into Lough Mask, which feeds into Lough Corrib through an underground stream which becomes the River Cong. Lough Mask is the sixth largest lake, by area, in Ireland. The eastern half of Lough Mask is shallow and contains many islands. The other half (Upper Lough Mask) is much deeper, sinking to a long trench with depths in excess of 150 ft.[1] Lough Mask has a mean depth of 50ft, and a maximum depth of 190ft.[2] Its water volume of 1,100,000 acre-ft is only surpassed in Ireland by Lough Neagh's 2,800,000 acre-ft and it is the largest lake, by water volume, in the Republic of Ireland.

The lake is popular for its trout fishing. The World Cup Trout Fly Fishing Championship takes place annually on Lough Mask at Cushlough Bay near Ballinrobe.[3]

In 1338 Sir Edmond de Burgh was drowned in the lake by his cousin Sir Edmond Albanach Bourke of County Mayo, at the end of the Burke Civil War of 1333–38. He was captured at Ballinrobe and taken to Oilean-an-lara (the Earls Island) where he was killed.

According to a side-note on the manuscript containing the oldest copy of The Pursuit of Diarmuid and Gráinne (Royal Irish Academy Ms. 24.P.9), Irish scribe Dáibhídh Bacach ("lame David") Ó Duibhgeannáin was living and working on Oileán Ruadh ('Red Island') on Lough Mask in the house of Tadhg Og O Flaherty on the date, April 1, 1651.

The lough was the scene of the 1882 "Lough Mask murders", when two bailiffs working for Lord Ardilaun were killed, described as "an old man and a lad".[4] Tensions had arisen in the area during the Land War and the proximity of land managed by Charles Boycott. The corpses were found in the lough itself. The controversial lack of credible witnesses led to four well-publicised trials of the accused in 1882-83.

According to local legend, a banshee haunts Bly Island, a small island in the lough. There have also been rumoured sightings of a banshee around the shore of the lough as well as other forms of paranormal activity.

Petersburg Outdoor Education Centre is situated on the shore of the lough, close to Bly Island. The centre uses the lake for numerous water sports including kayaking, canoeing and sailing.

"Loch Measca" was taken as the pen-name of Séan Seoighe (John Joyce) in Eachtra múinteóra an Irish-language memoir published in 1929.