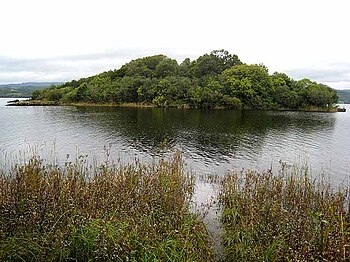 Lough Gill and the Isle of Innisfree

Lough Gill is a freshwater lake mainly situated in County Sligo, but partly in County Leitrim. The lake is mentioned in the poetry of W. B. Yeats and is within the district of Calry, famous for its beautiful scenery.

The name of the lake is from the Irish Loch Gile meaning bright or radiant lake.

Lough Gill is about five miles long and a mile wide. The Lough Gill system consists of the river Bonet that flows into the eastern end of the lake and the River Garavogue which drains the lake to the west near the county town of Sligo.

Picturesque as a lake, it is surrounded by woodlands, such as Slish Wood, Dooney Rock, and Hazelwood all of which contain popular nature trails and viewing points along the lake. The wooded hills of Slieve Killery and Slieve Daean dominate the south shore.

The lough is a popular location for birdwatchers.[1]

Lough Gill has a unique microclimate and is noted for its high number of rare or scarce animal and plant species. It is part of the 'Lough Gill Special Area of Conservation', including two habitats with priority status: alluvial forest, orchid-rich calcareous grassland.[2]

The vegetation of the area was dominated by mixed woodland from 4,600 BC to at least AD 1400. Scots pine was dominant until 3,400 BC. In a scientific study, Arbutus unedo pollen was found at Slish Lake dating from as early as AD 100, and so it is considered native to this area.[3]

The woods surrounding the lake are dominated by oak (Quercus spp.), rowan (Sorbus aucuparia) and willows (Salix spp.). The shores of the lake are home to the world's northernmost specimens of the rare Mediterranean strawberry tree (Arbutus unedo):[2] a small evergreen tree of the family Ericaceae, which in Ireland can grow to be a forest tree, reaching heights of up to fifty feet.

A small colony of common terns breeds on the lake's islands (20 pairs in 1993). Kingfishers flit across the waters of the lake.[2]

The lake contains about twenty small islands, including the famous Isle of Innisfree, made famous by William Butler Yeats:[1]

I will arise and go now, and go to Innisfree,
And a small cabin build there, of clay and wattles made;
Nine bean-rows will I have there, a hive for the honey-bee,
And live alone in the bee-loud glade.

The Lake Isle of Innishfree by W B Yeats

Other islands include Church Island, and Beezie's Island, which was inhabited until 1951. 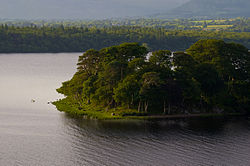 In the early historic era (5th-8th centuries), the area was home to a branch of the Cálraighe. Parke's Castle, a plantation fortified house on the northern shore, was built in the early 17th century by Captain Robert Parke on the site of a former tower house of the Uí Ruairc clann. The Uí Ruairc clan ruled the area from about the 7th century up to the time of Oliver Cromwell.

In 1196 - Congalach, the son of Farrell O'Rourke, was slain by the men of Lúighne, on Slieve-da-én (Mountain of the Two Birds).

1346 - A war broke out between O'Rourke, i.e. Ualgarg, and Rory, the son of Cathal O'Conor; and an engagement took place between them in Calry-Lough-Gill, in which O'Rourke was routed, and all his gallowglasses slain, i.e. Mac Buirrce, and Mac Neill Cam with their people. O'Rourke was afterwards pursued by Rory O'Conor and the Clann-Donough, and was killed by Mulrony Mac Donough. This was a lamentable deed.

In the 17th century, the lake became part of the Hazelwood estate.

The Metrical Dinnsenchus tells the following story of how the lake came to be and how it got its name.

"Bright Gile, Romra's daughter, to whom every harbour was known, the broad lake bears her name to denote its outbreak of yore. The maiden went, on an errand of pride that has hushed the noble hosts, to bathe in the spray by the clear sand-strewn spring. While the modest maiden was washing in the unruffled water of the pool, she sees on the plain tall Omra as it were an oak, lusty and rude. Seeing her lover draw near, the noble maid was stricken with shame: she plunged her head under the spring yonder: the nimble maid was drowned. Her nurse came and bent over her body and sat her down yonder in the spring: as she keened for Gile vehemently, she fell in a frenzy for the girl. As flowed the tears in sore grief for the maiden, the mighty spring rose over her, till it was a vast and stormy lake. Loch Gile is named from that encounter after Gile, daughter of Romra: there Omra got his death from stout and lusty Romra. Romra died outright of his sorrow on the fair hill-side: from him is lordly Carn Romra called, and Carn Omra from Omra, the shame-faced [gap: extent: two lines] Loch Gile here is named from Gile, Romra's daughter."[5]

Carn Romra and Carn Omra are the names of the two large neolithic cairns on Cairns hill overlooking the lake. 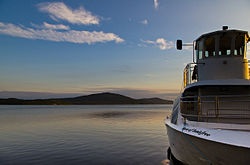 The lake is home to the Lough Gill 10 km Swim for the North West Hospice in Sligo. This annual fundraiser began in 2011 raising over €34,000 to date for the hospice also winning the coveted Irish Long Distance Swimming Association swim of the year in both 2011 and 2012. It is run by a committee made up of local swimmers and friends of the family of Neill McGarry, for whom the event trophy is dedicated. 57 swimmers completed the 2012 swim.

The first man to successfully swim the English Channel, Captain Matthew Webb, used the lake as part of his training for the feat. He was a friend of W.B. Yeats's grandfather, who lived in the area.