City of Derry Airport ((IATA: LDY, ICAO: EGAE)), otherwise known as Londonderry-Eglinton Airport is a regional airport located at Eglinton in County Londonderry, seven miles north-east of the City of Londonderry. The field is laid out on the south bank of Lough Foyle, a short distance from Eglinton. It was originally RAF Eglinton, and later became Londonderry Eglinton Airport'. Some years after its acquisition by the local council, they renamed it provocatively with their preferred (predominantly nationalist) version of the city's name. Locally it is commonly known still as 'Eglinton Airport'.

The airport has experienced a decline in passenger numbers over the last decade. In 2018, 185,843 passengers used the airport, which is a 58% reduction since its peak in 2008, and the airport's lowest passenger figures since 2000.

Loganair and Ryanair are currently the only airlines serving the airport, with scheduled domestic flights to five British destinations.

The airport has its origins in the Second World War. In 1941, RAF Eglinton air base was established as the home to No. 133 Squadron RAF which flew Hurricane fighters in defence of the city. In 1942 the base was occupied by the No. 41 Squadron RAF. In 1943 the airfield became a Fleet Air Arm base called RNAS Eglinton (HMS Gannet) and was home to the No. 1847 Fleet Air Arm Squadron which provided convoy air cover as part of the Battle of the Atlantic.

After the war the base remained a military establishment until the 1950s when the Ministry of Defence returned much of the land to the original landowners.

The original name of the airport as a civilian facility was 'Londonderry Eglinton Airport' and it was usually just referred to as "Eglinton". Some limited commercial activities were undertaken at the airfield during the 1960s when Emerald Airways operated a Glasgow service. Emerald built a new terminal building and control tower to support services with the first flight to Glasgow operating on 16 September 1967. During most of the 1970s the only flying at Eglinton was carried out by Eglinton Flying Club which is still based at the airport. In 1978 Londonderry City Council decided to purchase the airfield with a view to improving the transport infrastructure for the western Ulster. The airport has slowly developed since then with private short-haul charters to various destinations within the British Isles, a service which still continues including the recent addition of helicopter pilot training and charter services. Loganair introduced the first scheduled flight between Londonderry and Glasgow in 1979, a route which was dropped due to rising fuel costs. This route was the only route for ten years until Loganair introduced an additional daily Manchester service in 1989.

A major redevelopment programme was undertaken with grant aid from the European Regional Development Fund. £10.5 million was spent upgrading all of the facilities at the airport including runways, taxiways, access roads, navigation equipment and runway lighting, as well as a new purpose-built terminal and fire station. The new terminal was officially opened in March 1994. The name of the airport was officially changed from 'Londonderry Eglinton' to the 'City of Derry Airport' the Council following nationalist support within the newly renamed council. However, as of May 2014, the Aeronautical Information Publication published by the UK's air navigation service provider, National Air Traffic Services, still shows Londonderry/Eglinton. At that time there were still only two scheduled routes carrying about 40,000 passenger each year. 1995 saw the arrival of Jersey European Airways who attempted to operate a short-lived shuttle link between Eglinton and Belfast City Airport. 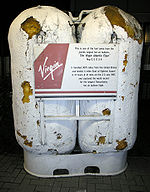 In 1987, the Virgin Atlantic Flyer, the first hot-air balloon to cross the Atlantic Ocean, came down in a field four miles from the airport (before lifting off again and being blown into the North Channel). Two fuel tanks from the balloon are displayed at Londonderry-Eglinton.

During 1998 and 1999 safety improvements were undertaken at the airport as a matter of priority. As the airport served Northern Ireland and also County Donegal in the Republic of Ireland, funding was sourced and thereafter provided by both the British and Irish Governments and by the council. These improvements meant that larger aircraft could use the airport, and Falcon Holidays accordingly started holiday charter flights in May 1999, followed in July by Ryanair who operated scheduled flights. The Ryanair service to London Stansted grew substantially and the Loganair routes continued to operate until October 2008 as a British Airways franchise, including a sector to Dublin, initiated as a public service obligation route, subsidised by the Irish Government.

Aer Arann operated services to Manchester and Birmingham for a short time.

From 2006, more taxpayers' money was poured into Eglinton, to lengthen the runway safety zones, expand the apron in front of the control tower to accommodate more parked aircraft. However at the same time operational hours were curtailed, causing problems for general aviation users.

The Belfast to Londonderry single track railway line of Northern Ireland Railways passes close to but not across the tip of the runway at the North Eastern end. Because it is in the Runway End Safety Area, safety systems ensure that no train can pass when aircraft are taking off or landing.[1]

Ryanair axed its services from Eglinton to Alicante and Birmingham in 2014, followed by its service to Faro]] in 2016, and in 2017 its daily Stansted service. This decline drew yet more largesse from the taxpayer but has not halted decline. Other Ryanair services continue but with substantial changes of route.