Belfast City Airport (IATA: BHD, ICAO: EGAC), which now bears the full official name George Best Belfast City Airport, is a single-runway city-centre airport in Belfast. It is in the city's docks, on the County Down side of the city, adjacent to the Port of Belfast and three miles from Belfast City Centre. It shares the site with the Short Brothers/Bombardier aircraft manufacturing facility.

The airport began commercial operations in 1983, and was known as "Belfast City Airport" until it was renamed in 2006 in memory of George Best, the professional footballer from Belfast who died of alcoholism the previous year.[1] The airport has a Civil Aviation Authority public use aerodrome licence (number P862) that allows flights for the public transport of passengers or for flying instruction. 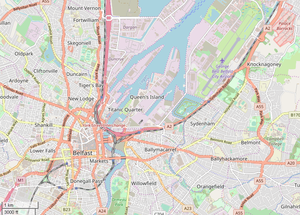 The airport primarily handles flights within the United Kingdom: international services fly from Belfast International Airport at Aldergrove. Belfast City handled over 2.7 million passengers in 2010, its peak year, and slightly below 2.6 million in 2017. It was a major base for Flybe, which began operations at the airport in 1993 and was the largest operator at Belfast City. Flybe entered administration on 5 March 2020 and ceased operations. In 2012 Aer Lingus opened a base at the airport, transferring operations from Belfast International. Ground handling is provided by Swissport[2] and Menzies Aviation,[3] the latter also offering cargo handling services.

Sydenham Airport was established by Shorts beside its Belfast factory at Sydenham in 1937. It was opened on 16 March 1938 by Anne Chamberlain, the wife of then British Prime Minister, Neville Chamberlain. The inaugural flight was to Glasgow.[4] This became Belfast's main civilian airport from 1938 to 1939.

The airfield was requisitioned by the Royal Navy during the Second World War and named HMS Gadwall. RAF Nutts Corner then became Belfast's main airport (while Aldergrove would later become the primary airport in Ulster).

In 1952, the runway was extended to its present 6,000 feet.[4] The Sydenham airfield continued to be used for naval purposes until the 1970s, including use by the Fleet Air Arm as a naval aircraft storage unit, after which it was used solely by Shorts.

In 1983, following interest from airlines and customers, the airfield was opened for commercial flights as Belfast Harbour Airport, subsequently Belfast City Airport, and now in its current form.

In March 2006, it was announced that the airport would be renamed in memory of Belfast-born footballer George Best. The new name, George Best Belfast City Airport, and signage were revealed at the renaming ceremony attended by Best's family and friends on 22 May 2006, which would have been Best's 60th birthday.[1] The renaming of the airport caused controversy, with many articles in local and national print media highlighting the mixed feelings of Belfast residents.[7] Also in March 2006 Flybe announced that it would be naming its Belfast City – Manchester service after the footballer, dedicating a plane to him.

In October 2007 Ryanair established its 23rd base at the airport, operating five routes and carrying 800,000 annual passengers. The airline closed its Belfast City base in 2010 due to delays in the planned runway extension. The airline stated that would fly to European destinations from the airport if the runway was extended.[8]

In January 2010 easyJet commenced flights to Luton, though the airline moved the route back to Belfast International in 2011.

Manx2 moved its Isle of Man service to the airport in 2010, however the airline has since ceased operations.

Flybe Bombardier Q400 on the runway

In January 2011 Bmibaby moved its Belfast base to the airport, in order to keep its operation under one roof with sister airline BMI.[9] The airline ceased operations from Belfast City Airport in June 2012.

In October 2012 Aer Lingus moved its services from Belfast International to the Airport. The airline launched flights to five destinations, though has since reduced their operations to just one route.[10] Spanish carrier Vueling launched summer-seasonal flights to Barcelona in May 2015, though the route was cancelled in late 2015.[11] Dutch carrier KLM launched daily flights to Amsterdam in 2015, with flights operated by KLM Cityhopper.[12] Brussels Airlines launched flights to Brussels in 2016, though the airline axed the route in 2017.[13] In early 2017, Eastern Airways commenced flights to the Isle of Man following the demise of Citywing, though the airline axed the route in 2018. Icelandic carrier Air Iceland Connect commenced flights to Keflavik in 2017 on behalf of Icelandair, though the route was cancelled in 2018.[14] Loganair commenced operations to Carlisle in 2019, followed by Dundee in 2020.[15]

Flybe, which was a significant operator at the airport, ceased trading on 5 March 2020.[16] 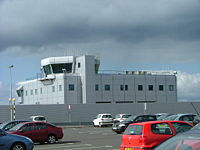 As the airport is adjacent to residential areas, the issue of noise pollution is a major one and a source of public debate. The airport has developed a noise management strategy following a planning agreement, under which the airport operates, and has established operational noise abatement procedures.

Sydenham railway station is adjacent to the southern perimeter of the airport, across the A2 from the old passenger terminal. It is served by frequent trains between Bangor and Portadown. Trains towards Portadown call at Belfast Central and Great Victoria Street railway stations. With the construction of the new passenger terminal further northeast, passengers arriving or departing by train can request an airport courtesy bus to take them to or from the terminal.

The airport is on the A2, Sydenham by-pass road between Belfast and Holywood.