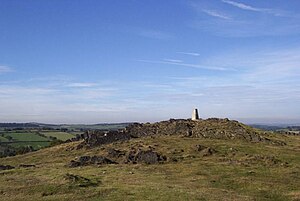 The summit of Beacon Hill 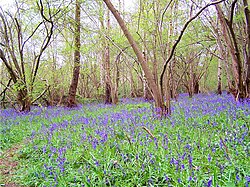 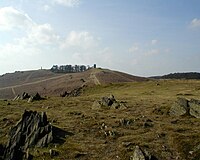 Charnwood Forest is an upland tract in north-western Leicestershire, bounded by the outskirts of Leicester, Loughborough and Coalville. The area is undulating, rocky and picturesque, with barren areas. It also has some extensive tracts of woodland.

Despite its name, Charnwood was never a royal forest, and was never subject to forest law.[1] It is though an ancient and well-established locality, with no fixed boundary.

The forest is an important recreational area with woodland walks, noted for their displays of bluebells in the early spring, rock climbing and hillwalking. Popular places with public access include Bardon Hill, Beacon Hill, Bradgate Park, Swithland Wood and the Outwoods and Stoneywell Cottage (owned by the National Trust).

The elevation of the Forest is generally over 600 feet, the area exceeding this height being about 6,100 acres. The highest point is Bardon Hill, which at 912 feet is also the highest point in the county.

On the western flank of the forest lies an abandoned coalfield, with Coalville and other former mining villages, now being regenerated and replanted as part of the National Forest.

The M1 motorway, between junctions 22 and 23, cuts through Charnwood Forest.

The hard stone of Charnwood Forest has been quarried for centuries,[2] and was a source of whetstones and quern-stones. The granite quarries at Bardon Hill, Buddon Hill and Whitwick supply crushed aggregate to a wide area of southern Britain.

Many of the craggy rocks of Charnwood Forest are of volcanic origin and are very old, dating back through 600 million years to Precambrian times.[3] It was the site of the first-ever recorded discovery of Charnia masoni, the earliest-known large, complex fossilised species on record. It was discovered in 1957 by a local schoolboy named Roger Mason (thus masoni) who, with friends, was exploring a quarry near the Charnwood village of Woodhouse Eaves. The rocks of Charnwood Forest remain the only place in Western Europe where these Precambrian fossils have been found.[4]

Along the western edge of Charnwood Forest the rocks are mainly Precambrian igneous diorites. These formed from molten lava deep within the sedimentary rocks, cooling slowly to produce hard, blocky rock with large crystals. This is extensively quarried for roadstone around Groby, Markfield and Whitwick, and is known as granite (formerly also called Markfieldite).[5]

The central area of the forest has older rocks still. These are sedimentary and are very variable in character, They were formed by material from volcanoes, settling in deep water, and it is in these beds that the fossils are found. Uplifting, tilting and erosion have produced the distinctive jagged exposures found across the highest parts of Charnwood.[6] On the eastern side, a much more recent series of rocks are found. Again igneous diorites, that formed deep underground, but these are Ordovician, from a mere 450 million years ago.[7] These are extensively quarried in the areas near Mountsorrel.

The earliest form of the name Charnwood is probably derived from cerne woda, which may be from from the British language carn, meaning cairn, and the Old English wudu, meaning wood. Some sources give cweorn, thus 'quern wood', because the forest was a source of the hard stone needed to fashion quernstones for grinding corn.

Archeological evidence has shown that the area was inhabited as far back as the Neolithic period, approximately 4,000–2,000 BC. Beacon Hill is the site of a Bronze Age hill fort, dating from between 600 BC and 43 AD. This forms one of the last surviving visible features in the landscape known to the Coritani, the tribe who occupied most of the East Midlands area at the time of the Roman Conquest.

According to Domesday Book, there was only one settlement in Charnwood Forest in 1086, at Charley whose name would appear to come from the same root, with the suffix -ley denoting open land, rather than forest.

In the 200 years after the Norman conquest, newly created settlements took major areas of land out of the forest for use in agriculture. Quorn was established between 1086 and 1153, and all the land up to Woodhouse had been deforested by 1228.

There were comparatively few major changes in land use in the post mediæval period, until the demand for timber and charcoal for the early Industrial Revolution contributed to a further loss of woodland. By the end of the 18th century, most of the woodland had disappeared leaving large areas of moorland and pasture. 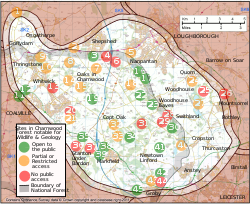 Charnwood Forest has been defined by the Natural England as a 'National Character Area'.[8] Their definition takes a somewhat wider definition of the forest than any conventional definition.[9][10]

The Forest covers about 67 square miles of Leicestershire. It includes a national nature reserve, nineteen 'sites of special scientific interest', ten Geological Conservation Review sites, of which four are designated 'sites of international geological importance', and several other designations. It contains five local nature reserves, seven nature reserves maintained by the Leicestershire and Rutland Wildlife Trust, and one Woodland Trust woodland. Seventeen sites have open access to the public. Footpaths and bridleways give views and limited access to the other sites listed, and to the rest of the Charnwood Forest landscape.

Over half of Charnwood Forest is included within the National Forest. It is also crossed by two waymarked long distance walking routes, the Leicestershire Round and the Ivanhoe Way.

The area was the inspiration for "Charnwood Poems", a collection of poems by the author, playwright and poet Albert Francis Cross (1863–1940). It is also the setting for the speculative fiction novel "Some Kind of Fairy Tale" by Graham Joyce (2012), in which it is depicted as a possible portal to the realm of fairies.