The hill has two very distinct faces – one half is preserved as a "site of special scientific interest", while the other has been quarried away as the Bardon Hill Quarry. At the hill's summit is a radio mast. The second highest hill in Leicestershire is the nearby Beacon Hill.

The village of Bardon was also known as "Bardon Hill" and this village lay to the south-west of the actual hill. Most of the village has been demolished but the name "Bardon Hill" remains in use as the postal address of the remaining local properties. 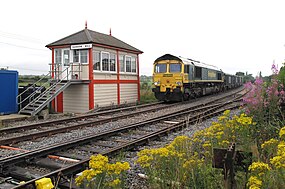 Bardon Hill has been the site of a quarry since at least 1622. A small quarry is shown on a map of 1835, with large scale working starting in 1857. The Leicester and Swannington Railway, opened in 1832 and taken over by the Midland Railway in 1845,[1] ran conveniently close to Bardon Hill. A short branch line from the quarry allowed the granite to be easily transported over the railway network. In 1877 the quarry was described as "great", and in 1890 as "much enlarged". It is currently owned by Aggregate Industries.

In 1840, the then deer park was chosen as a picnic spot for a visit by Queen Adelaide, the Queen Dowager. T R Potter describes the Royal scene in The History of Charnwood Forest:

Her Majesty, in a dress of elegant simplicity suited to the occasion, supported by Earl Howe, and her Royal sister (the Duchess of Saxe Weimar) by Lord Curzon, ascended the steep with great apparent ease. On arriving at the summit, upwards of an hour was spent in the enjoyment of the wonderful prospect, of which her Majesty frequently expressed her admiration – Lord Howe pointing out the many remarkable near and distinct objects which the fineness of the day brought within the reach of view.

The Queen's repast was laid out on the grass on the east side of the Summer House, but her Majesty, finding the sun oppressive, wished to remove to the adjoining shade – and setting the example, took up the first dish, and was followed by the rest of the party, all bearing some portion of the viands. The place selected by the Queen for the rural banquet has since been named "Adelaide's Bower."

The landscape was already attracting visitors before John Curtis wrote in the 1830s: he suggests that the view extends to over 5,000 square miles or one twelfth of England and Wales. Potter also notes of the view from Bardon Hill that "it probably commands a greater extent of surface than any other point of view on the island" and that "An outline, described from the extremity of this view, would include nearly one-fourth of England and Wales. It may be deemed one of the most extraordinary points of view in Nature." This has attracted telecommunication companies, and large transmitters and radio masts have replaced both the Summer House and Queen Adelaide's Bower. The view is still there and on a clear day one can see the Malvern and Shropshire Hills, summits in Derbyshire and Lincoln Cathedral. The claim is some time made that Sugar Loaf, Monmouthshire is visible from Bardon, but this stretches credibility, as Sugar Loaf is over 90 miles away.

Bardon Park was a mediæval deer park, covering about 1,200 acres. Bardon Hill was within the area of the park, and also Bardon Hall (see below). The area may have been emparked before 1300. The line of the southerly boundary of the park runs a few yards north of the A11 road.

There is still deer within the area of Bardon Park, as well as foxes and badgers. There are several breeding pairs of buzzard and peregrine as well as raven and barn owls.

The old hall was a moated house, in a shallow valley south of Bardon Hill. In the 1830s, a new hall was built half way up the hillside. The current hall is a gentleman's residence with a southerly aspect and with commanding views over the parkland. The old hall was demolished, probably at about the time the new hall was built, but the moat that surrounded the old hall remains. The current hall is a Grade II Listed building and it is the head office of Aggregate Industries, the owners of the Bardon Hill Quarry.

For several hundred years Bardon Hall was the home of the Hood family. In the 1830s a Mr Robert Jacomb inherited Bardon Park (which included Bardon Hill and Bardon Hall) from William Hood who was a relative of his father's first wife. Robert took the hyphenated name Jacomb-Hood.

In the 1690s the owner of Bardon Hill and Bardon Park, John Hood, built a Christian meeting house at the gate of the Bardon estate; one of the oldest non-conformist places of worship in Leicestershire. The date "1877" is carved in the stonework above the door of the meetinghouse or chapel, but this is just the date the building was re-modelled, while the basic structure of the building is regarded as dating from the 1690s.

During the 19th century a village of quarry workers' cottages was built south-west of Bardon Hill. The cottages were very close to the quarry, and they were demolished in about 1988.

The Church of England parish church of Saint Peter was built in 1899. It is beside the main A511 road, a short distance east of the Birch Tree public house. It had its own vicar, but is now part of a united benefice with Christ Church, Coalville and St Michael and All Angels, Ravenstone.

An unlikely local legend suggests that Bardon Hill is actually the Mount Badon of Arthurian legend. The battle at Mons Badonicus is historically attested as a victory of the Britons over the ancestral English which took place at some time around the year 500. It was a major military and political event of the 5th or 6th century in Britain, but there is no certainty about its date or place, nor of who commanded at the battle: it was attributed to King Arthur by Nennius in the ninth century.

Local stories claim that Arthur watched the approach of the Saxons from the summit of the hill and that his forces then swept down the hill and massacred them. A nearby field name is still called Battle Flat, and the legend also claims that the dead were buried at nearby Billabarrow hill. However, the only connection seems to be a similarity of name. That the name "Bardon" can be interpreted as "farmer's hill" in Old English is conveniently forgotten in the weaving of romantic legend.