Whitwick is a sprawling village in the Leicestershire coalfield, a situation which has shaped the village and the landscape. It stands to the north of Coalville. The ancient parish of Whitwick includes the equally historic villages of Thringstone and Swannington.

This was an important manor in the Middle Ages, which once included Bardon and Markfield, parts of Hugglescote, Donington le Heath, Ratby, Bocheston, Newtown Unthank and Whittington.[1] As early as 1293, Whitwick had a weekly market and a four-day fair.[2] The population of Whitwick, according to the 2001 census is 10,815 persons. 8,092 of these fall into the 16-74 working age range, although only 4,689 are employed.

The Three Cities of Whitwick

Locally it is said that Whitwick contains three cities. These are areas of the village: the City of Three Waters and the City of Dan are accepted as postal addresses, situated respectively at the foot of Dumps Hill and Leicester Road. Over the years, there have been many contenders for the location of the 'third city', the most popular being The City of Hockley - an area located midway between the Cities of Three Waters and Dan, close to the parish church, and alongside the stream running through the village, though older residents have always maintained that this area was known simply as The Hockley. 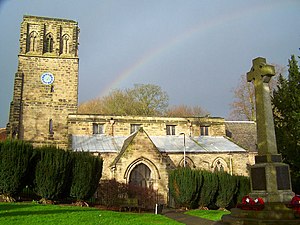 The parish church of St John the Baptist is an ancient structure, nestling in a natural amphitheatre, close to the confluence of two streams. A spring, emanating from under the chancel, is also discharged into the watercourse, through a piped outlet protruding from a stone wall at the east end of the churchyard. This spring is said to have been used during the 19th century as means of powering the bellows of the church organ.

It was also conjectured by the local historian, George Green of Loughborough, that a fragment of pre-Norman cross shaft would appear to be incorporated into the chancel wall, supporting the idea that a church may well have existed on this site in Anglo-Saxon times, though there is conclusive structural evidence beyond the thirteenth century. The church today is mainly of the 14th century, with only the south doorway seeming to go back to the 13th century.[3] The massive decorated western tower contains a peal of eight bells, four of which were cast in 1628, and in the north aisle can be found the mutilated alabaster effigy of a knight, which tradition has to be that of Sir John Talbot, who died in 1365.[4] Talbot is said to have been a giant, and this accounts for the exceptional length of the monument.

The church was thoroughly restored during the 19th century, when the chancel was rebuilt by James Piers St Aubyn, 1848-1849. A vaulted substructure or crypt is situated beneath the chancel, necessary to maintain a level between the chancel and the nave due to the steepness of sloping ground at the east end.

From 1319 until its dissolution in 1536, Whitwick Church was an endowment of the Benedictine priory of Upholland, near Wigan, Lancashire.[5] Following royal sequestration, the patronage of the living passed to the King and Whitwick Church remains one of forty-two churches nationally which are in the patronage of Her Majesty the Queen (in right of her Duchy of Lancaster). 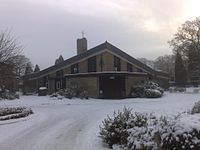 Ambrose de Lisle who lived at Grace Dieu Manor was a zealous and wealthy convert to Roman Catholicism, and he made Whitwick an important centre of the Roman Catholic revival.[6] A Cistercian monastery, Mount St Bernard Abbey], was established within the parish in 1835. In 1875, a small convent of Rosminian nuns was established - 'The Old Convent' is now a private residence.

One of the earliest mentions of the place, as Witewic, is in the Domesday Book, the name of the settlement meaning either "The White Farm" or "Hwita's Farm", which may have been a reference to the outcrop of white sandstone found here.[7] It was listed amongst the lands given to Hugh de Grandmesnil [8] by King William I. There was said to be land for half a plough and woodland which was a furlong by half a furlong. Its value was two shillings.

Whitwick had a 12th-century motte and bailey castle, although no remains are left. This was held by the Earls of Leicester, though it was recorded as being ruinous by 1427. The foundations are said to have been visible at the end of the 18th century and a wall was still to be seen on the north side in 1893.[9] A licence to crenellate the structure was issued in 1320 to 'Henricus de Bello Monte, Consanguineus Regis' (Henry Beaumont, blood-relative of the king). The building work resulting from this licence may have provoked an attack by Sir John Talbot. Beaumont's claim to the land was from his wife's inheritance and, it seems, Talbot felt he had a claim to Whitwick. Twenty years later the capital message was worth nothing.[9]

The mound retains the title of Castle Hill and is surmounted by a 19th-century folly, with a castellated roofline. This was built in 1846 by a local landowner, Joseph Almond Cropper, as almshouses for the poor.

From 1838 until the early 20th century, there was a thriving weekly market held in Whitwick Market Place. As well as the regular local stallholders a number of Leicester tradesmen attended and it is remembered that old ladies used to bring their butter and other farm produce and line up alongside the gutter.[10] In the years following the First World War, competition from the larger and newer market at Coalville eventually resulted in its discontinuance.

The annual fair, or 'wakes', was once a popular event and coincided with the patronal festival of the parish church. At the height of its popularity in the early 20th century, it is remembered that the larger amusements stood in the opening in front of the White Horse public house and there were wild beast shows including seals swimming around in tanks. The local photographer would take snapshots (on glass) and deliver them while the customers waited. There was also once a 'Cabbage Street Wakes', of rather obscure origin, when cabbages were used to decorate the lampposts in Cademan Street.[10]

Whitwick Colliery was opened on the outskirts of the parish by the engineer William Stenson near Long Lane in 1824, precipitating a massive expansion and development of this industry across the north west of Leicestershire. Though coal mining on this scale was only a major concern in Whitwick for a century and a half - a relatively short period for a settlement with a documented history spanning ten centuries - the place is still considered by many to be a colliery village due to the massive physical impact of the industry on the character of the village in terms of homogeneous red brick housing development during the 19th and 20th centuries. With the exception of the parish church, few - if any - ancient buildings survive.

There was a mining disaster on 19 April 1898 in Whitwick Number Five Pit which resulted in the deaths of thirty five men. Patrick O'Mara, one of those killed, was found on his knees with his rosary beads still in his hands. The youngest victim was John Albert Gee of Thringstone, who was aged just thirteen years. A memorial tablet to those killed can be found in the parish church at Coalville.

The pit was closed in the 1980s and the site is now occupied by a Morrisons store. An old winding wheel can still be seen at the foot of Leicester Road, erected as a monument to Whitwick's mining past following the closure of the colliery.

During the 18th century, framework knitting became an important cottage industry in the village, taking over from agriculture. As early as 1723/24, William Clark, son of William, was apprenticed to Joseph Howe. This apprenticeship was to run from Michaelmas 1723/24 for seven years. By the beginning of the 19th century, Leicestershire, Nottinghamshire and Derbyshire had become the centre of the British hosiery trade. In 1844, there were 423 knitting frames in Whitwick and by this time, the cottage industry had been in decline for some years, from a change in fashions. 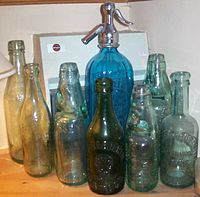 Whitwick also once had three mineral water factories. The largest was Bernard Beckworth on Cademan Street, established in 1875, which closed in the 1970s.

On Loughborough Road, there stands an old public house built of forest stone and known as 'The Man Within Compass'. This title is thought to be unique in England though again with uncertain origins. The pub is more commonly known as 'The Rag and Mop'; several of Whitwick's public houses developed nicknames, some of which - like The Rag and Mop - have origins which can only be guessed at. Other examples are 'Mary's House' (The Hare and Hounds) and 'Thripnies' (The Crown and Cushion, Silver Street - now closed).

The village has a King George V Playing Field.