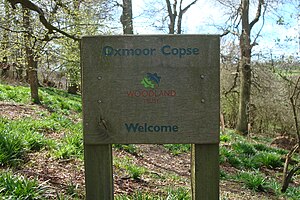 The Woodland Trust is a conservation charity in the United Kingdom concerned with the protection and sympathetic management of native woodland heritage. 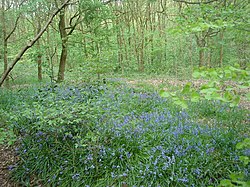 The charity was founded in Devon in 1972 by retired farmer and agricultural machinery dealer Kenneth Watkins.[1] By 1977 it had twenty two woods in six counties. In 1978 it relocated to Grantham in Lincolnshire and announced an expansion of its activities across the United Kingdom. It has supported the National Tree Week scheme, which takes place in late November and is run by The Tree Council.

From 2005 to 2008 the Woodland Trust co-operated with the BBC for their Springwatch programme and the BBC's Breathing Places[2] series of events held at woods.

The Trust is now based in Grantham in Lincolnshire. It employs around 300 people at its Grantham headquarters. It receives funding from a wide range of sources including membership, legacies, donations and appeals, corporate supporters, grants and charitable trusts including lottery funding, other organisations and landfill tax.

The Woodland Trust publishes several books. It uses its experience and authority in conservation to influence others who are in a position to improve the future of native woodland. This includes government, other landowners and like-minded organisations. It also campaigns to protect and save ancient woodland from destructive development. Its projects also include the Nature Detectives youth programme, a project for schools learning about the seasonal effect on woodlands - phenology - and the Ancient Tree Hunt campaign.

The Trust looks after more than 1,100 woods and groups of woods covering 70 square miles. Nearly 350 of its sites contain ancient woodland of which 70 per cent is semi-natural ancient woodland – land which has been under tree cover since at least 1600. It also manages over 110 Sites of Special Scientific Interest.

It has also created new woodlands: over 10 square miles have been created, including 250 new community woods across the land. Its largest current projects include the Error: mismatched units Glen Finglas Estate in the Trossachs, Perthshire and the Heartwood Forest near St Albans in Hertfordshire, which will together cover approximately 857 acres. It owns 20 sites covering Error: mismatched units in the National Forest and has twelve sites in Community Forests in England.

The Woodland Trust's "Woods on your doorstep" project created 250 "Millennium woods" to celebrate the millennium 2000/2001.[3]

The Trust has launched a Jubilee Woods project, which aims to plant 6 million trees and create 60 commemorative 'Diamond' woods across the UK as part of Queen Elizabeth II's Diamond Jubilee celebrations in 2012.[4] The largest of these, owned and managed by the Trust itself, is the Flagship Diamond Wood in Leicestershire. Situated within the National Forest, this will be planted with 300,000 trees.

The Ancient Tree Hunt is a campaign by the Woodland Trust that seeks to catalogue all veteran trees in the United Kingdom. To date over 50,000 trees have been recorded; by 2011 it is projected to have grown to at least 100,000. It is hoped that it will allow a better understanding of the number and spread of ancient trees in the UK.[5] It was started in 2004 by The Tree Register of the British Isles and the Ancient Tree Forum.[5]

The trees catalogued by the project are recorded in a database maintained by the Woodland Trust. All entries (both verified and unverified) may be viewed on the campaign's website. All recorded trees may be viewed on an interactive map, or refined listings (of only verified trees) may be generated through a form generated search of the database. 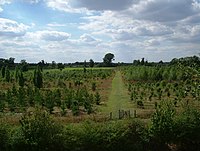 Woodland near South Ockendon in Essex 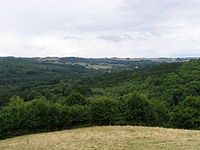 Woods which the Woodland Trust owns and looks after include: