Sonning, occasionally called Sonning-on-Thames is a village in Berkshire, sitting on the banks of the River Thames a few miles east of Reading. The village was described by Jerome K Jerome in his book Three Men in a Boat as "the most fairy-like little nook on the whole river". 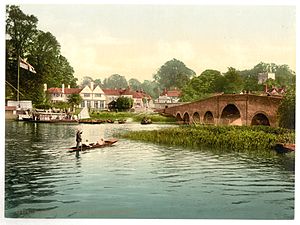 The Thames at Sonning

Sonning village is at a crossing point of the River Thames, where the narrow arched Sonning Bridge on the B478 crosses the river to the hamlet of Sonning Eye on the Oxfordshire bank. Just upstream of the bridge is Sonning Lock.

The old village is now joined to further housing along Pound Lane and the A4 Bath Road. It lies some three miles east of the major town of Reading. In other directions this would put it within the Reading suburban sprawl, but Sonning remains a clearly delineated small village. 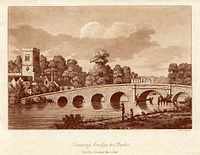 The historical name of the village is Sunning, apparently derived from Old English for "Sunna's people.[1] Older, more traditional villagers still pronounce the name of the village in this way and the spelling can be found on old maps and documents. A seventh century charter of the underking Frithuwald of Surrey refers to the neighbouring Mercian province of "Sunninges", which name Sonning preserve. In Anglo-Saxon times, the village was of considerable importance as the lesser centre of the Bishopric of Ramsbury, sometimes called the see of Ramsbury and Sonning. The church was a secondary cathedral and the present structure, St Andrew's Church, contains re-used Anglo-Saxon carvings. By the 12th century Sonning church had eight dependent churches, four of which had become independent parishes by the 15th century.[2] This is an example of the organisation of the Anglo-Saxon church into minsters with their own parochia known as the minster system.

Sonning prospered as an important stopping post for travellers, both by road and by boat. There were a number of ancient hostelries where they could have stayed, notably the Great House on the site of the original ferryman's cottage. The Bull Inn had the added bonus of being near the church where pilgrims could venerate a relic of Saint Cyriacus. The Bishops of Salisbury succeeded those of Ramsbury and Sonning and had a Bishop's Palace in the village until the 16th century. King Richard II's young bride, Queen Isabella of Valois, was kept captive there during his imprisonment and deposition.

Aberlash House is a Grade II listed house situated on an island in the River Thames at Sonning. It was originally built in the 17th century and formerly owned by the Rich family, Lords of the Manor of Sonning. 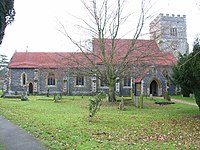 The Great Western Railway passes about half a mile south of the village, in a two-mile long cutting, Sonning Cutting. It was opened in 1840, and was the scene of one of the first railway disasters in 1841, when a goods train ran into a landslip. Nine passengers died in the accident, being thrown from the open trucks just behind the engine. Many were stonemasons working on the Houses of Parliament, and the disaster led to changes in the Railways Act, which required that third-class passengers be carried in stoutly constructed carriages rather than open trucks. The Act also created Parliamentary trains for third-class passengers.

Just outside the village, above Sonning Lock, is the independent secondary school, Reading Blue Coat School, in the 19th century manor house, Holme Park. Built in the 'Home Park' of the old palace, it replaced a Georgian mansion erected for the Lords of the Manor who eventually superseded the bishops. The first of these was Laurence Halstead, partner to the Reading cloth merchant, John Kendrick.

In the early 20th century, a second country house was built in the village, the Deanery. It provides a fine example of an Edwin Lutyens house with a Gertrude Jekyll garden, originally designed as a show house for the founder of Country Life magazine.

The Sonning Village Show is held every September at the village primary school.

The Sonning Regatta, restarted in 2000 and is held every two years just upstream from Sonning Lock.

There are playing fields between Sonning and the main A4 road, including hockey and rugby fields.