The Conwy Railway Bridge carries the North Wales coast railway line across the River Conwy in Caernarfonshire between Llandudno Junction and the town of Conwy. The wrought-iron tubular bridge, which is now Grade-I listed, was built in the 19th century by Robert Stephenson. It is the last surviving example of this type of design by Stephenson after the Britannia Bridge across the Menai Strait was destroyed in a fire in the 1970s. 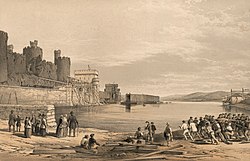 The bridge was constructed to carry the Chester and Holyhead Railway across the River Conwy. Robert Stephenson, in collaboration with William Fairbairn and Eaton Hodgkinson, provided the engineering plans. Before their involvement it was intended to be a suspension bridge, complementing the 1826 Conwy Suspension Bridge by Thomas Telford. However, after Stephenson's appointment as chief engineer, the design changed because a suspension bridge was considered not robust enough to carry trains. Stephenson and his collaborators invented wrought-iron box-girder construction in order to bridge the River Conwy in a single span.

The project's architect was Francis Thompson, who dressed the pylons at either end as barbicans, complete with crenellated turrets, arrow slits and bartizans to complement the adjacent Conwy Castle, an Edwardian fortification that had stood on the promontory since the late 13th century. The bridge contractor was a William Evans. Construction began in 1846. The ironwork was constructed by Easton & Amos.[1] Steam-powered hydraulic engines were used to lift the wrought-iron girders and beams into place from barges moored in the river.

The bridge was officially opened in 1849, although it had been completed in 1848. Stephenson wanted to confirm through testing that the structure, the first tubular crossing to be built, would be capable of carrying the weight of a locomotive and its rolling stock. The testing was performed by Fairbairn. The successful results endorsed the construction of the Britannia Bridge. In 1899 the tubular sections were reinforced with additional cast iron columns to reduce the load on the span across the river.

Conwy railway bridge remains the only surviving example of a tubular bridge designed by Stephenson. The original Britannia Bridge was consumed by fire in 1970. Although it was subsequently rebuilt, it was reconstructed as a two-tier truss arch bridge made from steel and concrete.