Seathwaite is a hamlet in the Borrowdale valley in Cumberland. It is found 8 miles southwest of Keswick at the end of a minor road that heads south from the portion of the B5289 road that runs between Borrowdale parish and Seatoller over the Honister Pass.[1]

The nearby Seathwaite Fell takes its name from the hamlet and lies about a mile to the south–southwest of it.

The village's name is belived to derive from the Old Norse words sef þveit ("sedges clearing"), as is the nearby village of the same name in Dunnerdale; Seathwaite, Lancashire. [2] The name, then spelled Seuthwayt, first appeared in written records dating from 1340. [3]

Along the nearby Newhouse Gill that descends from Grey Knotts is a graphite mine[4][5] that was started after the discovery of graphite there in 1555.[6] The extracted graphite was eventually used to supply the Derwent Cumberland Pencil Company factory in Keswick.

The commercial mining of the unusual solid form of graphite found near Seathwaite hamlet was stopped by about 1891 when veins of the solid graphite became harder to find.[7] Also, around that time the Keswick pencil factories had switched to making pencil pigments out of the familiar combination of clay powder and graphite powder. Graphite powder could be mined and imported from elsewhere.[7] The mine entrance is north–northwest of the hamlet.[4][5]

For many years Seathwaite was a secluded spot being connected to the main road at Seatoller by a rough track. However, as fellwalking became a popular outdoor activity at the end of the 19th century, the hamlet became a popular starting point for walkers bound for the surrounding mountains. The road was eventually surfaced, and now motorists park their cars along the verges on the approach to the farm. Seathwaite has become one of the most popular starting points for walking in the UK giving access to well known mountains such as Scafell Pike, Great Gable and Glaramara.

Seathwaite, once in a little world of its own with few visitors, has become a pedestrian metropolis. Great days on the fells begin and end here.[8] 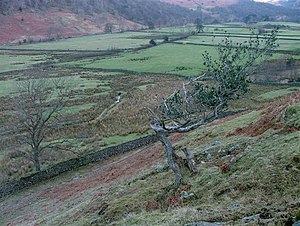 The valley at Seathwaite looking to the north.

Seathwaite is the wettest inhabited place in England and receives around 140 inches of rain a year.[1][9] In September 1966, five inches of rain fell on Seathwaite and the surrounding fells in an hour, the resulting flood severely damaging the nearby Stockley Bridge, which lies 1,200 yards south of the hamlet. Stockley Bridge is an ancient packhorse bridge which lies on the old route between Borrowdale and the Cumbrian coast. The bridge was widened in 1887 and had to be repaired after the 1966 storm.[10] On 19–20 November 2009 Seathwaite received 12.38 inches of rain in a 24-hour period, a major contributor to the floods of that year. If confirmed this is a record for the amount of rain falling in any place in the United Kingdom within 24 hours.[11][12]