Barlby is a linear village in the East Riding of Yorkshire, situated two miles to the north-east of the market town of Selby. It is bordered to the west by the River Ouse and to the east by the A19 Barlby bypass. Across the bypass is Barlby's smaller sister village, Osgodby with which it forms the civil parish of Barlby with Osgodby. It originates as a chapelry of the ancient parish of Hemingbrough and was also a civil parish between 1866 and 1935, when it was merged with that of Osgodby.[1]

The toponym is from an Old English personal name Bardolf, with the Old Danish suffix -by ("farm" or "village"), thus "Bardolf's farm". The place is mentioned in the Domesday Book.[2] 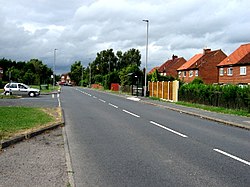 Seen from the air, Barlby is long and narrow. It is approximately three miles in length, and runs along the old route of the A19. Although it is classified as a single village it consists of two distinct areas: Barlby Hilltop, at the north end of the village; and Barlby Bridge which lies slightly to the south-west. The building of new estates in recent years has blurred the division between the two.

Like other settlements in the Vale of York, the village has historically been vulnerable to flooding, and was particularly badly hit in November 2000. The main electrical substation in the area was damaged by the flood, resulting in power loss for up to a fortnight. The Prince of Wales visited Barlby, Naburn and York following the flood.[3]

The existing flood defences were improved as part of an £18 million scheme that was completed in 2008.[4] As a result of the flood defence improvements, the Environment Agency considers the entire residential area of Barlby to be in the 0.5% (1 in 200) "low risk" category for flooding.[5]

Barlby is served by a bus service which runs between Selby and York. The service runs through the village every 20 minutes on weekdays. In June 2013 contractors completed a new three-lane roundabout that was built on the A19 and A63 junction between Barlby and Osgodby. The roundabout was designed to slow traffic. The previous junction, constructed in 1987 was poorly set out which contributed to many traffic accidents. Since the completion of the roundabout there have been fewer accidents, traffic moves more slowly and in greater safety.[6]