Riccall is a village in the East Riding of Yorkshire, found three and a half miles north of Selby and nine miles south of York. According to the 2011 census the parish had a total population of 2,332.[1]

Riccall lies on the Humberhead Levels. At the end of the last Ice Age about 10,000 years ago Riccall lay underneath the very large Glacial Lake Humber. This gives the area its characteristic light sandy soil.

Riccall is the starting point of the ten kilometre Cycle the Solar System route which follows the Selby−York cycle track finishing in Dringhouses, York. The cycle track used to form the old route of the East Coast Main Line via Selby, and Riccall station served the village until 1964.

The village was the site of an Anglo-Saxon settlement and there is evidence of a Saxon church on the site of the current St Mary’s. The early settlers most likely chose the site because of two geographical factors: the area forms a slightly raised plateau above a flood plain; it is near the Ouse.

Riccall was the site of the base camp of Harald Hardråda, King of Norway in 1066. He landed on the banks of the Ouse after sailing up the Humber estuary and set up camp at Riccall before his victory in the Battle of Fulford. However this was to be his last taste of victory, as his army was defeated shortly afterwards by the forces of King Harold of England at Stamford Bridge, at which Norse Harold was slain. The event is commemorated in one of Riccall's streets, now a footpath, named after Olaf who looked after the camp in Harald's absence, and in Danes Hills so named for its tumuli. There is now a small information panel about the event at the bottom of Landing Lane, approximately where the Norsemen moored. 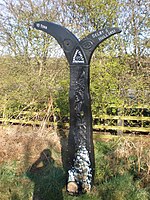 About forty years after the Norman conquest the current St Mary’s was built using stone quarried from the magnesian limestone ridge which lies approximately eight miles to the west. The old south door of the church has a carved Romanesque arch and its 12th-century three-stage tower has Norman double window openings.

Until 2004 the village was a mining village; the Riccall Mine was part of the Selby Coalfield. The colliery, located southeast of Riccall, closed in 2004.[2] The site of the colliery was re-developed as a business park.[3]

The village has a primary school, post office, shop, hairdresser, beauty salon, butcher, a tavern and inn, Italian and Indian restaurants and the Regen Centre, an award-winning conference, events, and community facility. The Regen Centre houses a bar, four outdoor tennis courts, and a small sports hall where football and badminton can be played. The village playing field is a Queen Elizabeth II Field.