Allanton is a small village in Berwickshire, standing high above the confluence of the Whiteadder Water and the Blackadder Water, the site of two bridges.. For many years it was part of the estate of Blackadder House, which was demolished around 1925.

The closest market towns to Allanton are Duns and Berwick-upon-Tweed.

‘Adder’ is from the old English word ‘ædre’, meaning ‘stream’. There is mention of Blakadir de Eodem (of that ilk) holding lands in the earldom of March in 1426.

The village was traditionally part of the estate of the Blackadders, a powerful border family. The Blackadder family were an integral part of the constant feuds which beset the old borderlands, and opportunistically extended their lands by grants from King James II of Scotland. These were bestowed as a reward for repelling English raids with great ferocity.

In 1518 the holdings of the Blackadder family were taken into the family of Home (now the Home Robertson family) by the enforced marriage of the daughters of Robert Blackadder to younger sons of Home of Wedderburn. A junior branch of the Blackadders, the Lairds of Tulliallan disputed the succession, but without success.

Allanbank House, the Dower House to Blackadder House, was notoriously haunted by Pearlin Jean. Reputedly a French woman (possibly a nun), whom the first baronet of Allanbank, then Mr Stuart, met with at Paris.

Called 'Pearlin' for the diaphanous lace in which she appeared, Jean was Stuart's lover, until his return to Scotland. When she went to try and stop Stuart leaving her, he ordered his coachman to drive on. Jean fell and Stuart's carriage ran over Jean, killing her.

Nearby Edrom was notable as the site of a notorious incident of Body Snatching in 1826, which resulted in a riot in Duns. After its recovery, the body of Peter McGall was buried for a second time and it is believed that one Mary Manuel from Allanton claimed a possible unique distinction of preparing a body for burial not once but twice.

Allanton is a single street, mostly lined with single storey terraced cottages. The earliest were built in the late 18th to early 19th century with gardens, on feus granted by Steuart of Allanbank. In the 20th century the village was notable as a village of tailors' shops, having three, the last of which closed in the 1960s. All three are now private residences. The village contains a public house and restaurant, a village hall, a children's playground and a public telephone booth. The Village Post Office closed in 2006.

Several houses in Allanton and on the Blackadder Estate use a common motif in their architecture: Tudor Style hood moulds, and fish scale bands of green, red and grey roof slating. This motif is seen on the Smiddy House, Sheaf House, North Lodge and Ardsheil among others. 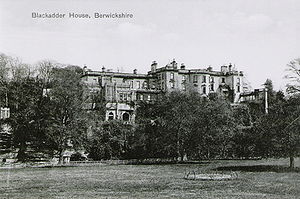 Within Allantons main street still stand a pair of splay-fronted lodges (Lydd Cottage and Westside Cottage), defining the entrance to the former Blackadder House, a magnificent classical house built in Palladian style around an earlier tower house. The farm of Blackadder Mains along with Blackadder Bank, Blackadder West and Blackadder Mount and the nearby village of Allanton were all originally part of the Blackadder Estate which surrounded Blackadder House.

The house was serviced by a small army of servants, many of whom were housed in the village. During the nineteenth century the Estate was owned by the Boswall family. When Euphemia Boswall inherited it in 1830 she was considered to be one of the richest heiresses in Britain.

During First World War the mansion was requisitioned by the government as accommodation for troops, who vandalised the building, using parts of the grand staircase bannisters for firewood. The post-war government refused to pay for the restitution of the house to its former state and with the agricultural depression it was closed up. It was demolished circa 1925.

Little remains of the house other than a folly walkway with stone balustrade which was at the back of the house below ground level, cut into the rock of a cliff face that overlooks the river Blackadder below. Where the house was, a wood was planted. Below the folly on the bank of the river the remains of the hydro electric power house is still visible (Blackadder House was reputedly the first in Berwickshire to have electric lighting).

Other buildings built to service the estate remain. Blackadder Cottage (or the 'Butler's House') with an impressive pair of lions on the parapet, sits on a high bank above the Blackadder Water. Allanbank Courtyard is a U-planned steading begun c. 1780. There is also a Walled Garden with a Summerhouse, and several bridges over the Blackadder Water. An impressive stable range with tower and obelisk steeple survive the destruction of the house.