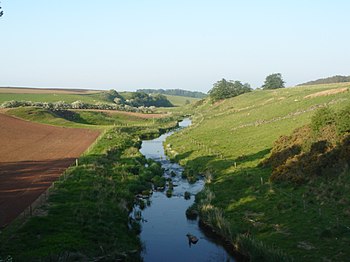 The Blackadder Water is a river in Berwickshire, a tributary of the Whiteadder Water forming part of the River Tweed system.

Rising in the Harecleugh Forest plantation just south of the Twin Law cairns, north of the village of Westruther. The headwaters of the Blackadder join with those of the Wedderlie, Edgar, and Fangrist Burns, before reaching the town of Greenlaw.

The river proceeds in a meandering path through the Merse until it meets with the Langton Burn between the estates of Kimmerghame House and Wedderburn Castle.

The Blackadder falls into the Whiteadder Water at the village of Allanton, where Blackadder House and its estate once stood.

The Blackadder has given a name to the village of Blackadder at its foot, and to the title of Lord Blackadder, though not to the character of the same name in the eponymous television series by Richard Curtis.