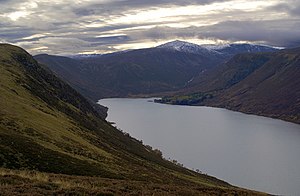 Loch Muick to Broad Cairn and the White Mounth 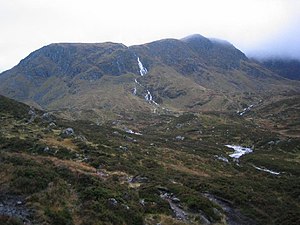 The Mounth is the range of hills on the southern edge of Strathdee, forming the easternmost part of the Grampian Mountains, spreading across the borders of Aberdeenshire, Perthshire, Angus, and into Kincardineshire. The hills reach as far as the sea coast in Kincardineshire and historically have formed a formidable barrier separating the lands to the north and south.

The name "the Mounth" is from the Gaelic language; monadh meaning "mountain range", which is cognate with the Welsh mynydd, meaning "mountain". The word may be of Pictish origin. Traditionally there was no single name for the Grampian Mountains, and that name is still undefined, for these mountains have several range, and these were known as Mounths. There are mountain ranges to the west known as Monadh Liath and Monadh Ruadh (the Cairngorms), which could be glossed as the Grey Mounth and the Red Mounth respectively. Within the range now known as "the Mounth" is "the White Mounth", around Lochnagar. 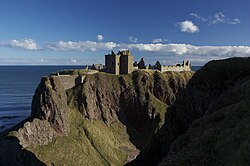 The mountainous landforms of the Mounth form an outlying ridge of the Grampians stretching from Ballater in the west to the North Sea coast immediately north of Stonehaven. Historically they formed a formidable barrier which, to some extent, isolated the north-east of Scotland from the Lowlands, physically and culturally. This part of the coast was then a strategic location, guarded by castle, at which many an army met its enemy. It might be where Gnaeus Agricola defeated Caligacus, at Mons Graupius (which inspired the much later coinage of 'Grampian').

In the Middle Ages an ancient path was built into a roadway, known as the Causey Mounth, was built to connect Stonehaven to Aberdeen, a road cut using an elevated rock causeway design to penetrate this boggy area of the eastern Mounth.[1] This route was by way of Cowie Castle, Muchalls Castle, Portlethen Moss and the Bridge of Dee. The route was that taken by the Earl Marischal and the Marquess of Montrose when they led a Covenanter army of 9000 men in the first battle of the Wars of the Three Kingdoms in 1639.[2]

Crossings of the Mounth

There are mountain passes through the Mounth used since ancient days, including: