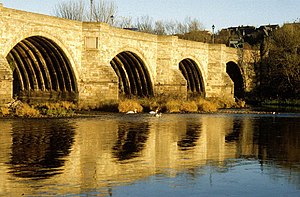 The Bridge of Dee or Brig o' Dee is a road bridge over the River Dee in Aberdeen, joining the two sides of the city, Aberdeenshire to the north of the Dee and Kincardineshire to the south.

The term is also used for the area of the city south of the bridgehead, in Kincardineshire.

Dating from 1527,[1] the bridge crosses at what was once the City of Aberdeen's southern boundary. This was the site of a battle in 1639 between the Royalists under Viscount Aboyne and the Covenanters who were led by the Marquess of Montrose and Earl Marischal.

The Bridge of Dee is approximately 30 feet above typical water height and consists of seven nearly semicircular ribbed arches, built using granite and Elgin sandstone. Today the bridge carries the main A90 road into Aberdeen from the south.

The bridge is a nationally important Scheduled monument and is protected by law.

The bridge was built following a bequest of £20,000 by Bishop William Elphinstone who died in 1514. The bridge was completed by Bishop Gavin Dunbar. It was nearly all rebuilt between 1718 and 1723, and in 1841 was widened from 14 to 26 feet under the direction of Aberdeen City Architect John Smith.[1] Smith also designed the Shakkin' Briggie, and worked on the Bridge of Don with Thomas Telford and Wellington Bridge with Captain Samuel Brown.

The bridge is located near the northern terminus of the Causey Mounth, a mediæval drovers' road connecting Stonehaven to Aberdeen. This ancient trackway specifically connected the Bridge of Dee by way of Bourtreebush, Muchalls Castle and Stonehaven to the south.[2] The route was that taken by William Keith, 7th Earl Marischal and the Marquess of Montrose when they led a Covenanter army of 9000 men in the first battle of the Civil War in 1639.[3]

Until 1832, the Bridge of Dee was the only access to the city from the south. The bridge still features the original 16th-century piers, coats of arms and passing places.[4]