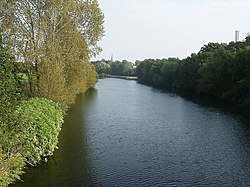 The Taff in Llandaff 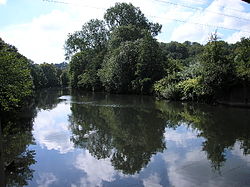 The Taff in Cardiff 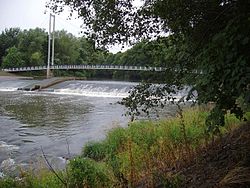 Weir and footbridge over the Taff in Cardiff 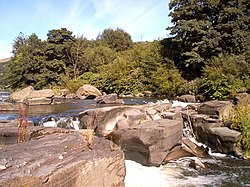 Waterfall on the Taff

The River Taff is the principal river of Cardiff in Glamorgan.

The Taff is a sizeable river. It rises as two rivers in Brecknockshire — the Taf Fechan (Little Taff) and the Taf Fawr (Big Taff) — which unite to form the Taff north of Merthyr Tydfil. The Taf Fechan forms the border between the counties of Brecknock and Glamorgan for four miles from Pontsticill to its confluence with the Taf Fawr at Cefn-Coed-y-Cymer, after which the latter takes the boundary westward as far as the Nant Ffwrd.

Notwithstanding the urban and industrial nature of the riverside towns, the Taff supports a number of migratory fish, including salmon, sea trout, and eels.

From its confluence at Cefn-Coed-y-Cymer, the river flows south, passing several towns. It picks up a few tributaries, such as the River Cynon, River Rhondda, Bargoed Taf and Nant Clydach. It flows underneath the M4 motorway, before turning south-eastward and flowing through the Cardiff suburbs of Radyr, Whitchurch, Llandaff, Pontcanna, the city centre and Grangetown, before emptying into Cardiff Bay, near to the mouth of the River Ely.

In the early 1840s the South Wales Railway was trying to find a suitable site for a railway station, but the area that is now Cardiff Central railway station was prone to flooding. At this point the main route of the Taff was around Cardiff Castle and down what is now Westgate Street, and the land where Cardiff Arms Park and the Millennium Stadium now stand wre tidal flats prone to flooding.

It was Isambard Kingdom Brunel's solution to divert the Taff to the west, creating a larger and safer site for the station. The station was opened by the South Wales Railway in 1850.[1]

The Taff Fechan rises immediately to the south of Pen y Fan and runs southwards through the two Neuadd Reservoirs, Pentwyn Reservoir and finally Pontsticill reservoir before descending into a wooded gorge and flowing south-westwards around the Gurnos estate. To the south of Cefn-coed-y-cymmer, the Taf Fechan and Taf Fawr merge at the wooded confluence that gives Cefn-coed-y-cymmer its name.

Underneath Cefn Viaduct, the Nant Ffrwd, a tributary that runs eastward in a deep wooded gorge before flowing into the Taf Fawr above the confluence with the Taf Fechan, emerges into the river from a deep, narrow gorge. It forms the county border for its entire length.

The Taff continues south through the centre of Merthyr Tydfil, where it is joined by the Nant Morlais which emerges at Abermorlais from a culvert in the east bank. Just south of Merthyr weir, the Nant Rhydycar joins.

South of Merthyr, the Taff begins to meander its way between Pentrebach and Abercanaid and through Troedyrhiw, Merthyr Vale and Aberfan towards Quakers Yard. Here, the Taff Bargoed joins and then downstream at Abercynon in the Cynon Valley the River Cynon merges with the Taff and, slightly further downstream the Nant Clydach joins. At Pontypridd it is joined by the River Rhondda. From Pontypridd, it runs roughly south, through Taff's Well and Radyr, before arriving at the northern boundary of the city of Cardiff in Llandaff.

Mouth of the Taff 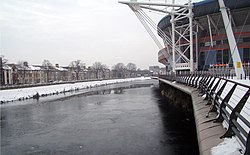 In Cardiff, the natural course of the river was changed during the 19th century; from Cardiff Castle it now follows an artificial riverbed west of where it previously flowed, now following a path through Bute Park and next to the Cardiff Arms Park and the Millennium Stadium, and into Cardiff Bay, which has now become an artificial lake due to the construction of a barrage across the mouth of this river and the River Ely. The waters then flow out into the Severn estuary.