Cefn-coed-y-cymmer is a small community in southern Brecknockshire that forms a suburb on the north-western edge of Merthyr Tydfil in neighbouring Glamorgan. It is situated in the neck of land between the rivers Taf Fawr and Taf Fechan, which together form the county border. It is the confluence of the two rivers that gioves the community its name, from the Welsh 'cymer'.

Immediately to the north of the village is the hill of Cefn Cil Sanws on the southern slopes of which is Merthyr Tydfil Golf Club. The village is bounded both to the north and the west by the Brecon Beacons National Park.[1]

Notable features of the village are the A465 Heads of the Valleys Road and the impressive curving Cefn Coed Viaduct. The viaduct, which spans the Taf Fawr river, came into being as part of the Merthyr- Pontsticill junction line. This additional line extended the Brecon and Merthyr Railway and was only agreed following a special Act of Parliament in July 1862 to allow its construction.[2] 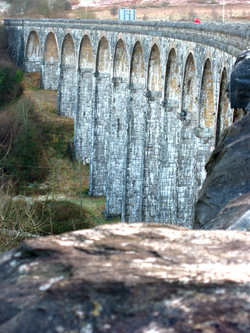 The viaduct is the third largest in Wales and is now a Grade-II listed building. It was designed by Alexander Sutherland in conjunction with Henry Conybeare and partly built by Thomas Savin and John Ward. In early 1866, the project faced disaster when Savin and Ward suffered serious financial and legal difficulties. It was eventually completed with the assistance of Alexander Sutherland. He produced an alternative route into Merthyr, curving the viaduct, so that the railway line avoided property owned by ironmaster Robert Thompson Crawshay.[3] It cost £25,000 to build.

It consists of 15 arches, each one 39 feet 6 inches wide, and is 770 ft. long with a maximum height of 115 ft. It crosses the Taff Fawr just north of the confluence with the Taff Fechan, and thus each end is in a different county. It was planned to be constructed entirely of limestone like the nearby Pontsarn Viaduct but a trade union strike by stonemasons in February 1866 caused the company to buy 800,000 bricks and use bricklayers to complete the 15 arches.[4] It was completed on 29 October 1866, three years after the main line which linked it with Brecon.[5] The last trains travelled over the viaduct in the mid 1960s and it subsequently fell into disrepair. It was refurbished by Merthyr Tydfil council with assistance from a grant from the National Lottery. It has now become part of the Taff Trail, route 8 of the National Cycleway.[6]

Beyond the last buildings of Cefn, parallel to the A470 Merthyr to Brecon road, lies another site of historical interest. This is the Jewish cemetery, one of the largest in Wales outside Cardiff. It was established and consecrated in the 1860s by the then thriving Merthyr Hebrew Congregation. The growth of the Jewish population in the area was mainly linked to the expansion of the mining and ironworks industry in the locality. Many were refugees from Russia, Poland and Romania, fleeing religious persecution.[7] The cost of the land for the cemetery was mainly paid for by the local community, but contributions were also made by Jewish communities and individuals across Britain, the largest amount being from the politician and philanthropist, Baron Lionel de Rothschild. Initially the cemetery was simply a burial ground, with no building on the site. In the late 1890s a simple brick built prayer house (ohel) was constructed, again using funds raised by the local Jewish community.[8] In 1935, the cemetery was extended, with the new section being formally consecrated in October 1935.[9] A map of the cemetery is held in the archives at Merthyr Tydfil Central Library.The map shows the location of approximately 570 graves, and gives the names and dates of death of many of the deceased.[10] Towards the end of the twentieth century, the Jewish population declined. The community has now left the Merthyr area and responsibility for maintenance of the cemetery has been transferred to the Local Authority.[11]