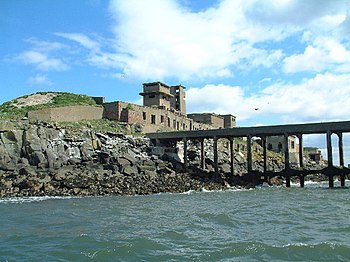 Inchmickery is a small island in the Firth of Forth which lies about a mile north of Edinburgh in Midlothian. It is found at NT207805.

The island's name comes from the Gaelic, Innis nam Bhiocaire, meaning Isle of the Vicar, implying that there may have been an old ecclesiastical or Culdee settlement here, as in nearby Inchcolm. It features occasionally in a riddle, "How many inches is the Forth?", playing on a pun of the number of islands named "Inch-" in the firth. 'Inch' is from the Gaelic (Innis), meaning "island".

Inchmickery is tiny, only 100 yards by 200 yards. During both First World War and Second World War the island was used as a gun emplacement. The concrete buildings make the island look (from a distance) like a battleship. Although the island is now uninhabited, much of this concrete superstructure remains largely intact. These buildings were used for filming scenes of the film Complicity.

The island is now an RSPB reserve, and is home to breeding pairs of Common Eider, Sandwich Terns and various gulls. It used to be a nesting site for the very rare Roseate Tern, but the roseate terns have now moved elsewhere in the Firth of Forth. There are exposed rocks off Inchmickery, known as the Cow & Calves.

Inchmickery was formerly known for its oyster-beds[1], and used to be covered in moss and lichen.