Horsforth is a town in the West Riding of Yorkshire, found to the northwest of Leeds and contiguious with that city's urban spread, opening to some open country at its own north-western edge. It had a recorded population of 18,928 in 2001.

Horsforth is one of the many places which once claimed to be the largest village by population in the United Kingdom, during the latter part of the 19th century, before it was grabbed by the spread of Leeds.

Horsforth is notable for having a large percentage of sandstone buildings sourced from local quarries, more than any other in the area.

The churches of Horsforth include:

Horsforth is first mentioned in manuscript in the Domesday Book of 1086 as Horseford, Horseforde, Hoseforde; but late-ninth-century coins with the legend ORSNA FORD and OHSNA FORD seem to have come from Horsforth. The name derives from Old English hors or, to judge from the coins, *horsa ('horse') so that the name means "Horses' ford".[1] This must refers to a river crossing on the River Aire, probably used for the transport of woollen goods to and from Pudsey, Shipley and Bradford. The original ford was situated off Calverley Lane, but was replaced by a stone footbridge at the turn of the 19th century.

The three unnamed English thegns that held the land at the Conquest gave way to the king and then lesser Norman nobles, but it was not long after this that most of the village came under the control of Kirkstall Abbey, a Cistercian house founded in 1152 on the bank of the River Aire downstream of Horsforth.

After the Dissolution of the Monasteries in 1539, Horsforth was partitioned and sold to five families, one was the Stanhopes who achieved supremacy and controlled the village for the next 300 years. The estate record of the Stanhopes is regarded as one of the most extensive and important collections of its kind, complementing the extensive mediæval record associated with Kirkstall Abbey.

Until the mid 19th century, Horsforth was an agricultural community which expanded rapidly with the growth of the nearby industrial centre of Leeds. At Woodside was founded in about 1820 the tannery business of the Watson family, at the eastern edge of their small family farm, now memorialised by Tanhouse Hill Lane. The business transformed into a soap manufacturer which moved in 1861 to Whitehall Road in Leeds and under the chairmanship of Joseph Watson junior, created Baron Manton in 1922, as Joseph Watson & Sons Ltd, became one of the largest soap suppliers in the land; second in size only to the Liverpool firm of Lever Brothers.[2] Industrially, Horsforth has a long history of producing high quality stone from its quarries. Not only did it supply Kirkstall Abbey with building materials and millstones in the mediæval period, it provided the stone for Scarborough seafront and sent its prized sandstone from its Golden Bank Quarry as far afield as Egypt. Situated on Horsforth Beck (Oil Mill Beck) were a string of mills serving the textile trade, but a large area of the town still reflects its original function as an agricultural community. 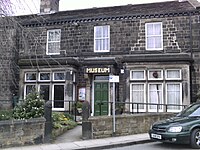 In the late 19th century it achieved note as the village with the largest population in England. Railways, turnpike roads, tramways and the nearby canal made it a focus for almost all forms of public and commercial transport and sealed its fate as a dormitory suburb of Leeds. (Horsforth continued to be known as a village despite its size until a newly created parish council in 1999 decided to call itself "Horsforth Town Council".)

Horsforth Village Museum[3] has collections and displays that aim to illustrate aspects of life set against the backdrop of the changing role of the village. 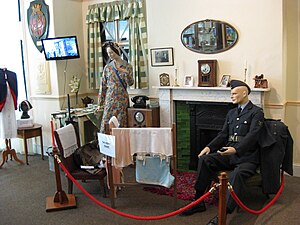 The Home Front at Horsforth Museum

During Second World War the £241,000 required to build the corvette HMS Aubretia was raised entirely by the people of Horsforth. In 2000 the then US President Bill Clinton acknowledged Horsforth's contribution to the war effort in a letter sent to local MP Paul Truswell.[4] The letter now resides in the museum.