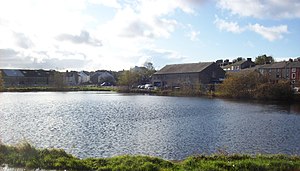 The basin of Ulverston Canal

The Ulverston Canal is a canal in the town of Ulverston in Lancashire. It is just a mile and quarter long and runs east-south-east from the town centre to the coast of Morecambe Bay.

The canal is entirely straight and on a single level. It is an isolated canal and does not connect to the main canal network.

Despite is shortness, the canal was sufficient connection to the sea that Ulverston was declared to be a seaport in 1774,[1] which allowed certain goods to be shipped to other canals without the payment of sea duty.[2] Ships of up to 150 tons could reach the shore at high water, and 70 vessels were registered there.

The canal had its origin in Lancashire's embrace of the Industrial Revolution. Trade in slate and ore was growing, and canal mania was gripping the country. A local solicitor called William Burnthwaite organised a meeting in July 1791 to consider ideas for a canal to improve access to the town, estimating the cost at £2,000, which sum had been raised by May 1792. The great canal engineer John Rennie the Elder produced proper plans for a ship canal, estimated to cost £3,084, including the construction of a sea lock. By October 1792, around £3,800 had been raised, and the proposers decided to proceed.[3]

An Act of Parliament for the canal received Royal Assent on 8 May 1793, intitled "An Act for making and maintaining a Cut or Canal from a Place called Hammerside Hill, in the parish of Ulverstone, in the county palatine of Lancaster, to a Place called Weint End, near the town of Ulverstone aforesaid."[4] The Act empowered "The Company of Proprietors of the Ulverstone Canal Navigation" to raise amongst themselves, for the purposes of the Act, the sum of £4,000 in shares of £50 each, with an additional £3,000 if required.[3]

The contract for the construction of the main canal was given to Pinkerton and Murray, while construction of the entrance lock was awarded to John Lancaster and James Duckworth. Work began on 23 August 1793, when the chairman cut the first sod, and was expected to be completed by September 1794. However, Pinkerton and Murray were also working on the northern end of the Lancaster Canal, and it seems they overstretched themselves, for they abandoned the contract in August 1795, when they could no longer pay the wages. H. Baird took on the work, which was finished in October 1796.[5]

The canal was opened in 1796, and provided the town of Ulverston with a port. The channel was 15 feet deep and 66 feet wide, but ship sizes were restricted by the lock, which could accommodate vessels of 100 feet by 27 feet, drawing between 12' 6" and 7' 6", depending on the state of the tide. In order to maintain the water level, a supply was taken from Newland Beck. Delays in construction meant that the final cost was over £9,200; and the opening coincided with a slump in the ore trade. It was not until June 1797 that William Burnthwaite was appointed as clerk, and a project to build a warehouse and toll office began, funded by a further call on the shareholders. Wharves for the transfer of slate and coal were constructed at the same time.[5]

Before the Furness Railway was built, Furness was cut off from the rest of the county by the fells country on its only landward side; the region was accessed only on foot by crossing the treacherous sands of Morecambe Bay, which was often dangerous. A passenger ferry to Liverpool from Ulverston Canal started in 1835, and it was later complemented by a service from Barrow-in-Furness to Fleetwood. A junction was formed with the Lancaster Canal. Coal, culm and cinders from the Lancaster Canal to the Ulverston Canal were not liable to sea duty. The canal serviced the movement of goods to places as far as Glasgow and Cardiff.[6] 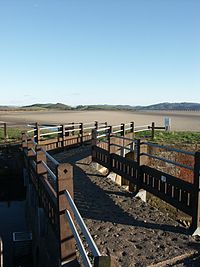 A footbridge at the canal foot

Other industries developed as the canal was used more. Timber-related industries such as charcoal burning and hoop-making were common; shipbuilding, gas and chemical works, rail engineering works, and paper manufacturing activities also provided employment.[6] In the 1800s there was a substantial shipbuilding industry at Ulverston, building wooden sailing ships which were strongly constructed to carry local ore rock cargoes.[7] An example of an Ulverston ship is the barquentine Gaerwen of 249 tons, built in 1878 and later trading from Salcombe.[8]

The opening of the Furness Railway in 1846 seriously damaged the profitability of the canal, which was eventually bought by the railway company. The rise of Barrow-in-Furness as a deep-water port also saw a decline in trade.[6] After 1878, no ships were built in Ulverston.[6] The canal was used commercially until the First World War and was officially abandoned at the end of the Second World War. It has since been maintained by Ulverston town council, who maintain a walkway on its eastern side. Its western side is still industrialised, with a large GlaxoSmithKline factory (built on the site of the former iron works and paper mills). Glaxo bought the canal from the town council in 1974, and used it as an emergency water reserve.[6] In 2009, GlaxoSmithKline reviewed their operations at Ulverston and later sold the canal to Ulverston Canal Company, a company set up to manage the asset. This is a subsidiary of NPL Estates Ltd, which specialises in land management. A trust has also been set up by GlaxoSmithKline, to ensure that funds are available for the canal's management, maintenance and preservation.[9]

In addition to the industry on its western side, there is a sheep and cattle auction by the canal, and other buildings, some of which have been renovated and some of which are dilapidated. At the end of the canal is a pub, and part of the Cumbria Coastal Way.[6]

The canal began at Hammerside Hill at Morecambe Bay and terminated at a basin and wharfs at Ulverston. At its head there is a 112-foot long sea lock, the only lock on the canal. A public swing bridge was built over the canal at Hammerside.

A local boast often heard is that the Ulverston Canal is the deepest, widest and straightest canal in the United Kingdom. However, the shortest is actually the Wardle Lock Branch of the Trent & Mersey Canal, and the deepest is the Manchester Ship Canal.