Castlebay is the main village on the island of Barra in Inverness-shire. The village is located on the south coast of the island, and overlooks a bay in the Atlantic Ocean dominated by Kisimul Castle, as well as nearby islands such as Vatersay. Castlebay is also within the parish of Barra.[1] The village is located on the A888, which serves as a circular road around Barra.[2]

Kisimul Castle is located approximately 100 yds away from the ferry terminal in the centre of the bay that Castlebay overlooks. It is the home of Clan MacNeil, but is currently under a thousand-year lease to Historic Scotland from the MacNeil of Barra.

In the 2010 Channel 4 programme Dom Joly and the Black Island, Joly and Tintinologist Michael Farr identify Castlebay and Kisimul as the locations of Kiltoch and the Ben More Castle used as settings in The Adventures of Tintin comic The Black Island, although the scenes of reaching it by boat and exploring it on foot were filmed at Lochranza Castle on the Isle of Arran.

Castlebay is home to the majority of shops on the island. The main street forms a square with the ferry terminal and the ring road, and features several grocery shops, a bank, post office, and tourist information centre. There is a larger supermarket now to the west of the village, having opened in October 2009. There are also several hotels in the village. 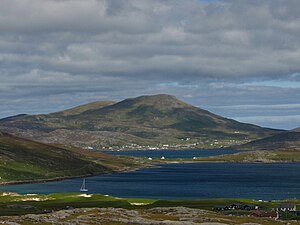 Castlebay village and the heights of Heaval, from Vatersay

The Catholic church in Castlebay, 'The Church of Our Lady Star of the Sea', was opened in 1888 on a mound overlooking the town centre. It was designed by an architect from Oban, G. Woulfe Brenan, along with a house further down the slope for the priest to reside in. The northern gable of the Church features a stained glass window depicting the Crucifixion, whereas the southern gables depict Our Lady Star of the Sea. In recent times, the Church has undergone renovation works that were completed in early 2007.[3]

The village is home to one of the important transport hubs of the island - the main ferry terminal. Steam ferries were known to be travelling between Castlebay and Oban in the late 1800s, albeit with notorious travelling conditions. In the 1980s, a roll-on-roll-off car ferry terminal was finally built in Castlebay, allowing much larger ferries to arrive on Barra. Between 1989 and 1998, the MV Lord of the Isles travelled daily between Oban, Castlebay and Lochboisdale on the island of South Uist, sometimes stopping on the Isle of Mull. In 1998, the MV Clansman replaced the MV Lord of the Isles on the Oban-Castlebay-Lochboisdale run. From April 2016, the former Stornoway ferry MV Isle of Lewis will take over the Barra service on a new dedicated service, operating seven return sailings a week between Castlebay and Oban, allowing Clansman to operate dedicated services from Oban to Coll, Tiree and Colonsay. Lord of the Isles will commence a new dedicated service between Mallaig & Lochboisdale, ending South Uist's link with Oban.

The island's ringroad, the A888, connects Castlebay to the rest of the island by road.