Tievebulliagh is a mountain of 1,818 feet in the Antrim Hills, through which slice the famed Glens of Antrim. The hill stands on the watershed between Glenaan to the north and Glenballyemon to the south, and is to be found about two and a half miles from Cushendall.[1]

Tievebulliagh is formed from a volcanic plug, the intense heat generated by molten basalt has given rise to the formation of a durable flint, porcellanite, which is found at the foot of the eastern scree slope of the mountain.[2] Three small outcrops of porcellanite can be seen on the higher south-east slope.[1] 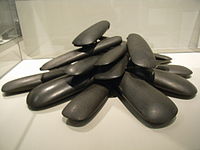 The Malone hoard of polished axes from Tievebulliagh or Rathlin Island

Evidence has been discovered of a Neolithic axe quarry at the foot of Tievebulliagh.[3] Flint axe heads fashioned from porcellanite that originate from this quarry have been found across the British Isles, from the Outer Hebrides to the south coast of Great Britain and across Ireland.[4] The site compares with the Langdale axe industry based in the Lake District and the quarries at Penmaenmawr in Caernarfonshire, where large numbers of stone axes were manufactured.

The "Malone Hoard" consisting of 19 polished stone axes from porcellanite Tievebulliagh or similar material from Brockley on Rathlin Island, was found at Danesfort house, on the Malone Road, Belfast. Some of the axes were inserted upright in the ground. The axes may be too big and heavy for practical use, so perhaps were meant to be used for ceremonial purposes. They are currently held in the Ulster Museum in Belfast.

There is a Bronze Age cairn on the mountain top. The round cairn and Neolithic axe factory on Tievebulliagh are Scheduled Historic Monuments sited in the townland of Cloghs (D193266)[6]

Numerous Neolithic and Bronze Age monuments are found in the vicinity in County Antrim, and include stone circles, long barrows and stone rows.