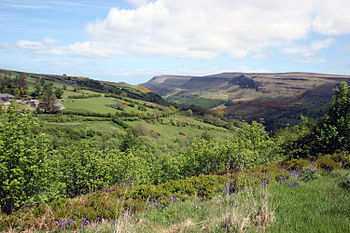 The Glens of Antrim radiate from the Antrim Plateau and run down to the coast all in the north of County Antrim; nine delightful glens much celebrated in art and literature. The Glens are a major tourist attraction in north Antrim.

The Glens have been designated an "area of outstanding natural beauty", though the outstanding beauty of these glens has been manifested to visitors since long before bureaucrats noticed. 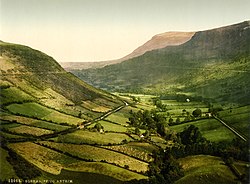 The nine glens from northernmost to southernmost are:

Glenravel is sometimes considered a tenth glen of the set. It lies to the southwest of Glenballyeamon and Glenariff, separated from the latter by the Glenariff Forest Park. The main settlements of Glenravel are Cargan, Martinstown and Skerry (Newtowncrommelin).

The main towns and villages in the Glens are:

The Lordship of the Glens, from the mid-13th century, first belonged to the Scottish-Irish-Norman Bissett family. In the mid-16th century it came into the ownership of the MacDonnells of Antrim, another clan which had its origin in the Hebrides and whose chieftain today is the Earl of Antrim.

In the Glens there is evidence yet of its early Neolithic communities. At Glencloy, Neolithic people had great stone-built tombs in the uplands, while they lived in settlements near the coast at the end of the valley. The beaches were sources of flint, as evidenced by stone tool manufacturing sites in the glens. At Madman's Window (near Glenarm) Neolithic chipping floors and stone axe rough outs were found along with Neolithic pottery, scrapers, flakes, and leaf-shaped arrowheads. At Bay Farm in Carnlough, a Neolithic site near marshland, archaeologists found occupation debris, charcoal, postholes, flint cores, axes and Neolithic pottery.[1]