Cushendall, formerly known as Newtown Glens,[1] is a desired village (and a townland of 153 acres) on the east coast of County Antrim (within the Barony of Glenarm Lower.

The village is one of the coastal villages strung along the A2 coast road, and it found between Glenariff and Cushendun, within the 'Antrim Coast and Glens Area of Outstanding Natural Beauty'. It sits in the shadow of the table topped Lurigethan Mountain and at the meeting point of three of the Glens of Antrim: Glenaan, Glenballyemon and Glencorp, looking out over the North Channel towards Galloway, with the Mull of Kintyre about 16 miles away to the north. In the 2001 the village had a population of 1,241 people, with a 2008 estimate of 1,363.

Much of the historic character of the 19th century settlement on the north bank of the River Dall remains. In 1973 it was designated as only the second Conservation Area in Northern Ireland, and includes the largely intact Irish Georgian buildings of the town's four original streets. Since 1990, Cushendall has hosted the Heart Of The Glens festival every August.

Thomas D'Arcy McGee, a father of Canadian Confederation, spent his childhood in Cushendall when his father, who worked for the Coast Guard Service, was posted there.[2] 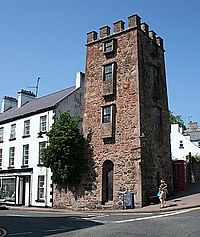 The Curfew Tower in the centre of the village was built by then landlord of the town, Francis Turnley, in 1817, to confine riotous prisoners. Dan McBride, an army pensioner, was given the job of permanent garrison and was armed with one musket, a bayonet, a brace of pistols and a thirteen-feet-long pike. The tower is now owned by artist Bill Drummond.

Oisín's Grave, off the main Cushendall to Ballymoney road, is a megalithic court cairn on a hillside in Lubitavish, near the Glenann River. Legend holds it to be the burial place of Ossian (or 'Oísín'), the Warrior Poet. A stone cairn was erected here in 1989 in memory of John Hewitt, the poet of the Glens.

The ruins of Layd Church (D24552892), a Franciscan foundation possibly partially from the 13th century, are found a mile north of Cushendall. They are also accessible by a cliff path from Cushendall, as well as by road. There are old vaults in the churchyard and it was one of the main burial places of the MacDonnells. There is a stone cross memorial to Dr James MacDonnell, one of the organisers of the last Belfast Festival of Harpists in 1792 and pioneer of the use of chloroform in surgery. By the gate of the churchyard is a holestone and nearby two 'corp stones' on which coffins were rested.[3]

Red Bay Castle, situated between the villages of Cushendall and Waterfoot. Built by the Bisset family in the 14th century and later occupied by the MacDonnells, one of the outposts of the Kingdom of Dál Riata.

Glenariff Forest Park, five miles inland from Cushendall, covers an area of 2,928 acres. In the park are two small rivers containing spectacular waterfalls, tranquil pools and stretches of fast flowing water tumbling through rocky gorges. There is a café, toilets and an exhibition centre. Four way-marked trails of varying length (half a mile to five and a half miles) wind through the forest leading into some of the park's wooded areas. One follows the Glenariff River with its famous waterfalls and passes through the National Nature Reserve. 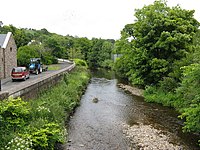 Cushendall offers a diverse range of shops, which offer local gifts and crafts, as well as many other items.

There is also an annual vintage car rally which is held in the village.[7]