Not to be confused with Sowerby Bridge nor Sowerby, West Riding

Sowerby is a small village and civil parish in the North Riding of Yorkshire, situated immediately south of Thirsk. The parish boundary merges with that of Thirsk, so the village could be described as a suburb. The author James Herriot lived in the village.

The lines of a Roman road can still be seen in the fields to the north and east of the village along the Green Lane and was known as the Saxty Way.[2][3]

The village is mentioned twice in the Domesday Book as Sorebi in the Yarlestre hundred. The land was split across both the head manors of Easingwold and Newsham. At the time of the Norman invasion, the manors were split between Earl Morcar and Ligulf, who granted land to Orm. Afterwards, the lands became Crown property.[4] The overlordship was granted to the Mowbray family, who granted land to William Lascelles in 1228. The Lascelles family held their manor until 1602, when it was sold to the Meynell family. The manor has followed the inheritance of the manor at North Kilvington since then. William de Vescy of Kildare held a mesne lordship in the area in the 14th century.[2][3] 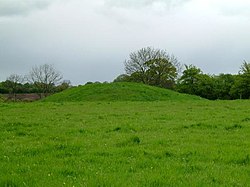 The Lascelles (Lassels) family were also credited with building a terrace of houses at the north end of the village, still known as Blue (or Bribery) Terrace, since tenants were expected to vote for the candidate who supported the Tory cause.[5]

Sowerby's name comes from the Norse language, in which it means 'Farmstead (by the) muddy/sour ground', which is the origin of the word sewer.[6]

An artificial mound known as Pudding Pie Hill[11] is on the east bank of Cod Beck, just off Blakey Lane. This was partially excavated in 1855 (by Lady Frankland Russell) and was found to be a sepulchral tumulus of a type known as a bowl barrow. The remains of a Saxon warrior and two other skeletons were discovered, along with cremated bones, various artefacts and coins.[2][3]

The boundary of the civil parish runs from the A168/A19 junction north to the Moor Lane Stell. From here it runs west, crossing Cod Beck and down Chapel Lane to then follow the A61 as far as Millbank Court. Here it runs south of the housing to cross the East Coast Main Line and then runs south to the boundary of Topcliffe airfield. It then runs east to include most of the small hamlet of Thorpefield and on to Ox Moor plantation. The boundary then follows the southerly route of the Cod Beck as far as, but not including, the hamlet of Westholme. It returns northwards to encompass Sowerby Parks to the A19 at Mile House and then to the A168/A19 junction. Paradise Beck lies wholly within the parish and joins Cod Beck near Sowerby Parks Farm.

The centre of the village has an avenue of English lime trees on Front Street, planted to celebrate the jubilee of Queen Victoria in 1887.[2] To the east of the village is a publicly owned open pasture known as the Sowerby Flatts. The fields show rig and furrow cultivation marks (i.e. dug with a spade rather than a plough) and the river shows signs of the abandoned project (started c. 1768) to build a canal from the centre of the town to connect with the River Swale.[3]

The primary schools in the village are Sowerby Community Primary School and All Saints Roman Catholic Primary School.[13][14] A School was originally built as a National School in 1872 on Front Street, but is now private property.[2]

The area's main industry is farming, though most people commute to nearby towns and villages. It is also a part of the local tourist activities, with holiday cottages, bed and breakfast providers and a touring caravan site just to the south of the village.

Amenities include a pub/restaurant, The Crown and Anchor, which is a Grade-II Listed building.[16][17] There are also many small and medium-sized businesses.[18]

Also within the parish bounds is the volunteer-run Ritz Cinema in Westgate. It was opened as a picture house in 1912 by Walter Power after converting the original 19th-century Mechanical Institute. After closing in the early 1970s, it was re-opened in 1983. There was another brief closure between 1994 and 1995. It has a seating capacity of 215.[19] 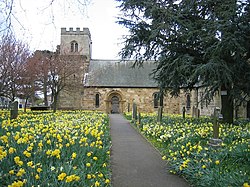 The parish church of St Oswald dates from about 1140. In 1145, Roger de Mowbray, nephew of William the Conqueror, gave the care of the chapel at Sowerby to the Prior of Newburgh, and historical records show that several members of the Lascelles family are buried here. The structure was rebuilt in 1842 and 1883 to accommodate a growing population. The church is a Grade-II* listed building.[2][3][20][21][22]