Swinton is a suburban town in the West Riding of Yorkshire, lying on part of the west bank of the River Don. It has a population of 15,559 (2011).[1][2][3] The town is five miles north-northeast of the large town of Rotherham and directly west-south-west of Mexborough. 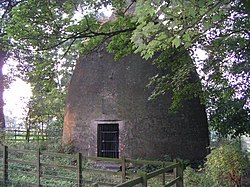 The town was once a centre for the manufacture of ceramics of international importance, and deep coal mining, glassmaking, canal barge-building and engineering.

It is best known for being the site of the Rockingham Pottery, a world-renowned manufacturer of porcelain. Although the factory closed in 1842 its name is left as defining a style of rococo porcelain. There were several other potteries in the area during the 19th century. One of the original kilns, a small part of the factory, a gatehouse (both now private residences) and the pottery flint millpond remain today in Pottery Ponds, a small park off Blackamoor Road near the Woodman public house. Swinton was also the site of another important but lesser known pottery, Don Pottery.

The village of Swinton lies between the Roman Ridge (extending approximately from Wincobank to the north-east of Sheffield, to Mexborough) and the south-west Roman road from Doncaster (the Roman fort and minor settlement of Danum). Furthermore, a coin hoard dating to the early 3rd century was excavated during the construction of a house cellar in the village in 1853. (Monument SK 49 NW5, Pastscape)

In June 2014, Mr Andrew Allen of Swinton uncovered a number of pottery sherds whilst gardening at home.[4] Preliminary observations found that this exciting new assemblage comprised approximately 90 pottery sherds, including high-status fabrics such as Samian ware, traditional cooking wares and rusticated pottery, as well as possible metal and glass-working waste products. It puts into question how important Swinton was to the Romans.

In October 2014 a crowd-funded archaeological project [1] commenced with an archaeological excavation taking place in the area of the pottery finds. This excavation found evidence of a Roman ditch and a possible Roman field system, as well as numerous pieces of pottery dating from the late 1st to mid 3rd centuries. Further archaeological excavation was undertaken in the spring of 2015 as well as a comprehensive geophysical survey of Swinton Fitzwilliam school playing fields. Further work is planned for the area with Mr Allen, Elmet Archaeology and the local community. 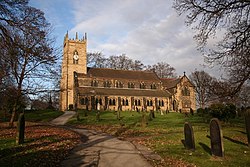 The town is situated on a hillside. The higher areas generally contain older dwellings, and the lower, newer build properties. The lowest part of the town contains two main rail lines, the River Don, the Sheffield and South Yorkshire Navigation canal and the derelict Dearne and Dove Canal.

Following the decline of traditional industries (and notably the 1980s miners' strike), employment is provided predominantly by service and light industry in the nearby Manvers area. Surviving within the area of railway lines and canals is a boat yard with a limited barge repair and transport business, and timber milling and woodworking facilities.

The Sheffield and South Yorkshire Navigation canal, once a major transport route between Sheffield and Goole, underwent substantial modernisation in the mid-1980s and is capable of accommodating large vessels as far as Rotherham, and pleasure craft through to Sheffield. Recently, limited bulk freight has returned to the canal with use of the modern Swinton Lock.

The town was without a railway station between January 1968, when the old station was closed as part of the Beeching cuts, and 1991, when a new station was opened, unstaffed at that time. This followed the restoration of the dual-track "Swinton Curve" (also known as the "Foundry Curve"), enabling trains to travel from Sheffield to Doncaster via Swinton. Increased passenger usage subsequently led to the provision of a small portable building staffed for morning peak times only. This was later replaced by a brick building housing a ticket office and waiting room. Some local bus services connect with trains at this facility.

Most manufacturing has ceased, but substantial warehousing remains. Morphy Richards & Roberts Radio brands run a large site in Swinton. An American bagel company operates in the town and there are centres for Stelrad and Jackson's building supplies and Tachart Ltd t/a Bolt and Nut Manufacturing.

Swinton's secondary school, with sixth form college, is Swinton Academy. It teaches pupils from age 11 to 18. The school was scheduled to be rebuilt on the current site. However, the scrapping of the rebuilding schools programme by the coalition government of the time meant that the school will not have a new building.

On the outskirts of Swinton and a short walk from Bow Broom estate is Dearne Valley College and the now empty Humphry Davy House which was used for nursing studies by Sheffield University. Students now studying nursing complete their studies in Sheffield at Hallam University who decided to not purchase and use the building off Golden Smithies Lane.

Swinton contains 14 public houses commonly called "The Swinton Mile", which range from the 'typical Yorkshire', 'country-style' pub serving food, modern bars, and a working men's club. A previous pub was demolished to make way for a block of flats.