The name Mexborough combines the Old English suffix burh meaning a fortified place with an Old English or Old Norse personal name, which may be Meke, Muik, Meoc, or Mjukr.[2][3]

Mexborough is located at the north eastern end of a dyke known as the Roman Ridge that is thought to have been constructed either by the Brigantian tribes in the 1st century AD,[4] perhaps as a defence against the Roman invasion of Britain, or after the 5th century to defend the British kingdom of Elmet from the Angles.[5]

The earliest known written reference to Mexborough is found in the Domesday Book of 1086 (Mechesburg), which states that before the Norman Conquest the area had been controlled by the Saxon lords Wulfheah and Ulfkil.[6] Following the Conquest the area fell under the control of the Norman Baron Roger de Busli. The remains of an earthwork in Castle Park are thought to have been a motte-and-bailey castle constructed in the 11th century shortly after the Conquest.[7] 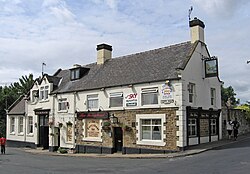 St John the Baptist C of E church includes elements that date from the 12th century.[8] A few other pre-1800 buildings remain, including several public houses: the Ferryboat Inn, the George and Dragon, the Bull's Head and the Red Lion. Most of the buildings in the town are post-1800.

Throughout the 18th, 19th and much of the 20th century the town's economy was based around coal mining, quarrying, brickworks and the production of ceramics, and it soon became a busy railway junction. These industries led to an increase in industrial illness and an increase in the mortality rate. Although the town boasted a cottage hospital, the lack of suitable facilities led to Lord Montagu donating land for a new hospital to be built. Lord Montagu laid the first stone at the site in 1904. The site is still a working hospital, and now forms part of the Doncaster and Bassetlaw NHS trust.

The industries which led to the creation of Montagu Hospital not only brought problems to the town, but also led to an increase in population and, for some, an increase in wealth and opportunity. Many more public houses and other businesses were created, many of which are still trading today. It was in one of these public houses, the Montagu Arms, that Stan Laurel stayed overnight after performing at the town's Prince of Wales Theatre on 9 December 1907.

For over a hundred years, the railway locomotive maintenance and stabling depot (colloquially known as "Mexborough Loco") was a major employer. The South Yorkshire, Doncaster and Goole Railway arrived in Mexborough in 1850. The extensive coal traffic generated by the local collieries required railway locomotives to haul them and these locomotives required driving, firing, refuelling, maintenance and stabling. Mexborough was chosen as the site for a large 15-road depot. In its heyday, it had an allocation of about 150 locomotives. In the 1920s it was the stabling point for the LNER Garratt, then the most powerful locomotive in the UK. The depot closed in 1964.

Following the demise of the coal mining industry in the 1980s Mexborough, like many ex-mining towns and villages, is still in the process of economic and social recovery.

The Rock Pottery, it is believed, traded during its early years as Beevers & Ford. In 1839 it was purchased by James Reed, who was succeeded ten years later in 1849 by his son John. Reed junior changed the name of the business to the "Mexborough Pottery" and the pottery was extended still further and more kilns constructed. When the Rockingham Pottery closed John Reed bought most of its moulds and produced many items from them, but with differing transfer prints and also plain green with raised leaf design impressed simply with "Reed".[12]

The town is served by Mexborough railway station for trains going towards Doncaster and Sheffield. Mexborough also has a bus station.

Mexborough has one secondary school (Laurel Academy) and many primary schools.

The last of the four was the most prominent and won the Yorkshire Football League in 1973.