Sutton Bonington is a village and parish lying along the valley of the River Soar in the Rushcliffe wapentake of Nottinghamshire. The University of Nottingham has a 1,040-acre site just to the north of the village.

The parish covers some 2,183 acres and includes the hamlet of Zouch. The population was recorded at the 2011 census as 2,202,[1] not including the students at the university campus who bring the total to over 2,200 in term time. The River Soar forms the county border with Leicestershire and approximately two miles to the north-west, in Leicestershire, is the large village of Kegworth. The nearest town is Loughborough, some five miles by road to the south, and the nearest village is Normanton on Soar.

Originally, Sutton and Bonington were two settlements, probably originating in Anglo-Saxon times (the names likely derive from South farm and Buna's farm); Sutton was to the south of Bonington. In the Domesday Book of 1086 the villages were recorded as "Sudtone" and "Bonitone". The two villages gradually grew together along the edge of the flood plain of the River Soar to make one long, narrow village, which by 1340 had come by the name of "Sutton Bonynton".

Today it continues to be a linear village, with much of the 20th century housing built along and just off Park Lane, making the Sutton part now larger than the Bonington part. Sutton Bonington Hall's gardens and parkland are set between the two original settlements and create a gap in the built-up area, and each part continues to have its own pub and parish church. The most recent significant development are houses built on the former rectory gardens near St Anne's Church, again enlarging the Sutton part. The total length of the village is now a mile and a quarter, not including the university campus.

The Midland Railway was constructed through the parish in 1840. Sir Cecil Paget, a notable locomotive engineer and railway administrator, was born in Sutton Bonington and in 1923 succeeded his father (Sir Ernest Paget, who was Chairman of the Midland Railway, 1890—1911) to become the 2nd Baronet Paget of Sutton Bonington. He died in 1936, without children (the title thereby becoming extinct), and was buried in the family plot at Marlepit Hill cemetery. The Paget family were the main landowners in the parish for much of the 19th century, owning the two ancient manors of St Anne and St Michael. It was under the Pagets that the current St Anne's Manor house and parkland was built, in 1848. 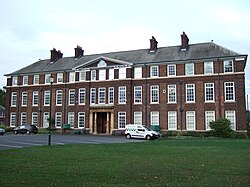 The front of the main (original) building of the former Agricultural & Dairy College, now part of the University of Nottingham.

The university campus was originally the Midland Agricultural and Dairy College, which formed in the first decades of the 20th century. The site was used as a prisoner-of-war camp during the First World War.[2] In 1948 the college became part of the University of Nottingham.

The campus has steadily grown over the decades and in 2006 the School of Veterinary Medicine and Science opened. The residential aspect of the campus ("Bonington Halls" – it consists of a number of spread out halls and houses) has also grown substantially in recent years and is now managed by Campus Living Villages (CLV). A masterplan was created in 2008 for the campus and envisages its development over the coming years – growth at present is towards Landcroft Lane, whilst in the future a considerable expansion is planned northwards towards Melton Lane.[3] In 2011 two new buildings will have been completed on the campus: the Gateway Building housing veterinary medicine and agricultural and environmental sciences (adjacent to the recently built veterinary sciences building) and the BioEnergy Centre[4] which is a research centre for international brewing company SAB Miller.

The village boasts a number of small shops, and the Soar Valley Garden Railway,[5] a post office, a village hall and library,[6] a primary school,[7] a doctor's surgery and two pubs: The Anchor (in the Bonington part) and The King's Head (in the Sutton part). A small industrial estate exists just outside the village on Rempstone Road.

The village also has two mediæval churches, a result of the merging of the two original villages (Sutton and Bonington); they are St Michael's Church (Bonington's church, located on Main Street) and St Anne's Church (Sutton's church, located down St Anne's Lane). The village has a large conservation area at its heart, with 25 Listed buildings contained within it. Sutton Bonington Hall and St Anne's Church are Grade II* (the remainder being Grade II).[8] Sutton Bonington Hall is a country house largely erected in the Queen Anne period and is locally known as "The Hall". In 1825 it came into the ownership of the Paget family and remained a residence until 2000; it has since gone into commercial use as a location for weddings, conferences and parties.[9] There is a Methodist church and a Baptist church in the Sutton part of the village. 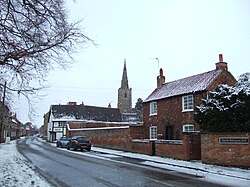 Main Street through Bonington, with the tower of St Michael's Church visible

Aside from the main village, the parish contains a number of outlying areas of settlement, including the university campus and the hamlet of Zouch. There are also two adjacent clusters of housing towards West Leake, at the junctions of Landcroft Lane/Melton Lane and Melton Lane/Pithouse Lane/Trowell Lane. Within the latter cluster is a 200-year-old public house called the Star Inn known locally as Pit House, the Victoria County History for Sutton Bonington states that "[i]t was also known as Pit House because it was used by miners from the gypsum ‘pits’."[10] Between 1982 and 2004 specialist car manufacturer GTM Cars used buildings in Trowel Lane as their factory and offices. Since their departure to Coventry these were been used by Talon Sportscars until July 2008.

In Zouch is the Rose and Crown pub. The Station Hotel was located adjacent to the former Kegworth railway station, lying just outwith the parish, but closed in 2011. Opposite the Hotel on Station Road are two further Listed buildings within the parish (in addition to the 25 in the village) at Sutton Fields – the House and its Lodge.[11] The Kegworth Old Lock, replaced by the Kegworth Deep Lock in the mid-1980s, on the Soar navigation, also lies within Sutton Bonington parish, and became Grade-II Listed on 12 October 1987.[12]

The Kingston Brook runs to the north-east of the parish, forming part of the boundary with West Leake parish. The boundary with Leicestershire is the River Soar. In places the river has more than one channel, and the boundary then runs at the centre of the widest channel of water, resulting in a number of islands falling within the parish, especially near Kegworth and at Zouch.

Adjacent to the main university campus is the University Farm, a near-1,000-acre commercial research farm, and an associated high-technology dairy centre; the farm partly lies in the neighbouring parish of Kingston on Soar, as does the dairy. Between the university campus and the railway line are offices (formerly a residence called "The Elms") and a laboratory belonging to the Veterinary Laboratories Agency, and a new sports hall and associated pitches.

Sutton Bonington Cricket Club was founded in 1824.[13] There is a lawn bowls club and a tennis club, both situated at the junction of Marle Pit Hill and Landcroft Lane. Two football teams, Sutton Bonington F.C. and Sutton Bonington Academicals F.C., are based at the Recreation Ground on Main Street, and both play in the North Leicestershire Football League.

There were two railway stations close to the village: Kegworth station (closed in 1968) to the north and Hathern station (closed in 1960) to the south-east. In 2008 East Midlands Parkway station opened at Ratcliffe on Soar, approximately 3½ miles to the north, providing good links on the Midland Main Line, which passes through the parish and on the eastern edge of the village in a cutting. Junction 24 of the M1 motorway is only 2½ miles away, near Kegworth, and the East Midlands Airport is also nearby to the west. The A6006 "Rempstone Road" runs along the south-east boundary of the parish – and through Zouch – and leads to the A6. The "Skylink" bus route serves the village and the university campus, with regular buses running between Nottingham city centre and Loughborough, including stops at Kegworth, the Airport, Long Eaton and Beeston. Another, less regular, bus service operates between Nottingham city centre and Normanton on Soar, via Clifton.[14]

The long-distance footpath, the Midshires Way, passes through the parish, running from West Leake to Kegworth along Melton Lane and Station Road. Two of the country lanes in the parish (Landcroft Lane and Hungary Lane) were designated as "quiet lanes" in 2004, giving equal priority between vehicular traffic and pedestrians, cyclists and horse riders.[15] The River Soar, which runs through Zouch and then along the western boundary of the parish, is canalised and is well used by small watercraft.