During the summer small electric boats can be rented from here to explore the Thames.

Streatley's ancient inn, The Bull has in its garden the rather unusual burial site of a monk and a nun executed in 1440 for 'misconduct'.

The village is about eight miles from Reading and 16 miles from Oxford. It is connected to Goring across the river by the Goring and Streatley Bridge, with its adjacent lock and weir. Goring & Streatley railway station on the Great Western Main Line is in Goring and serves both villages.

The village is mostly surrounded by National Trust land: Lardon Chase, the Holies and Lough Down.

The Ridgeway long distance path passes through the village, which is the finishing line for the annual "Ridgeway 40" walk and trail run.[1] The Thames Path, Icknield Way and the Ridgeway all cross the Thames at Streatley. 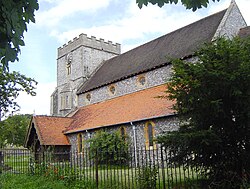 The parish church of St Mary. It used to be part of the Reading Episcopal Area of the Diocese of Oxford, but has now moved to the Dorchester Episcopal Area, a grouping crossing the county boundary for the first time in 1,400 years. The village has a Church of England primary school with a feeder pre-school attached to it.

Streatley is listed in the Domesday Book of 1086.

In 1674, sixty people were drowned at Streatley when a ferry capsized.[3]

In days past, the whole of Streatley was owned by the Morrell family of brewers from Oxford, whose resistance to change enabled the village to withstand the trainline and extra houses that went to Goring. However, the mill burned down in 1926, and was not rebuilt, and on the death of Emily Morrell in 1938 the estate was sold. The manor house as well as other houses in the village became part of the Royal Veterinary College, which had moved out of London during the Blitz. They left in 1958.[4] 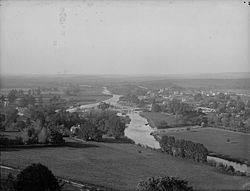 The village is the subject of the late Victorian poem "A Streatley Sonata" by Joseph Ashby-Sterry:[6]

The Bull at Streatley was made famous by Jerome K Jerome's Three men in a boat:

The annual Goring and Streatley Regatta is held each July on the Streatley side of the river. In the 19th century it was a serious regatta to rival Henley or Marlow, but now it is a local regatta for amateur teams of inhabitants of the two villages.

A Torchlight Procession of villagers and visitors merges with another stream from Goring each Christmas Eve, in an attractive night-time spectacle which continues onto Streatley Recreation Ground where celebrations continue with an annual Carol Singing Service.

There is a golf course in the village, founded in 1895, which has views of the Thames and Ridgeway.

Streatley Hill is a destination for cycling hill climbs - the annual Reading Cycle Hill Climb takes place every September. The hill featured in the Tour of Britain in 2008 as a designated King of the Mountains climb. 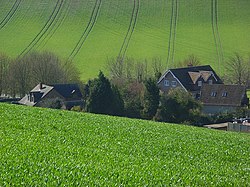