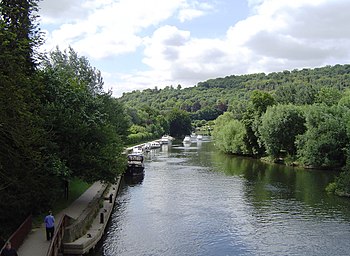 The River Thames as it passes through the Gap 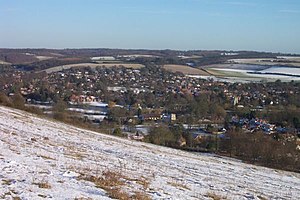 The Goring Gap is the gap in the hills through which the River Thames forces its way, between Oxfordshire on the north bank and Berkshire on the south bank. The gap is approximately 8 miles upstream from Reading, at Goring-on-Thames.

On the north bank of the Thames are the Chiltern Hills and on the south bank the Berkshire Downs, which two ranges are geologically one.

Half a million years ago the River Thames flowed on its existing course through Oxfordshire, but then turned northeast to flow through Hertfordshire before eventually reaching the North Sea in East Anglia near Ipswich. At the end of the last Ice Age the amounts of meltwater entering the Thames caused it to cut a new route through the chalk at the site of the Goring Gap. The newly formed route is that which we know today, between Oxfordshire and Berkshire on eastwards to where London stands today and then opening into the North Sea.[1]

The Goring Gap represents an important communications and transportation corridor accommodating a major road connecting Reading to Oxford along with the principal railway line west from London (Paddington).