Strathmiglo is a village in Fife, on the River Eden. It stands beside the old road from Milnathort to Cupar and St Andrews (the A91 route) but was bypassed by a new road to the north in the 1970s. The population is around 1,000. Nearby settlements include Auchtermuchty and Falkland.

The village's interesting name is from the Gaelic Srath Mioglach, srath meaning 'valley'.

Strathmiglo is thought to have belonged to the Mormaers of Fife in early times. Before 1350 it had become the centre of the shire of Strathmigloshire. It became a burgh of barony in the 16th century, by which time it belonged to the Scotts of Balwearie. Before the Reformation it was the site of a collegiate church. The village has several houses dating from the early 18th century.

The economic life of the burgh in early times was linked to nearby Falkland Palace. In the 18th and 19th centuries the textile industry was important, as was boot-making in the 20th. The tollbooth of 1734 is a prominent landmark.

There is a Pictish stone by the cemetery. The latter probably dates from the 9th century and shows a pair of legs (with toes) and stomach above. The upper torso and head are missing as the upper part of the stone is broken and missing. The explanatory plaque inexplicably and impossibly describes it as a carving of "a tuning fork".

The village, though small, has a King George V Playing Field. 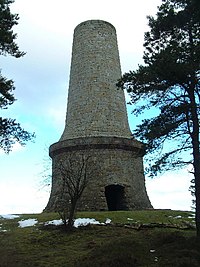