From Wikishire
Jump to: navigation, search
Not to be confused with the Falkland Islands

Falkland is a town and royal burgh in Fife, standing at the foot of the Lomond Hills. It was formerly known as the Parish of Kilgour, in records of around 1300. It most famous for Falkland Palace, once an important royal palace and now in the care of National Trust.

According to the 2008 population estimate, the village has a population of 1,180.

A village is believed to have existed at Falkland before the 12th century. However, this was not until the erection of Falkland Castle some time after 1160 which was the crucial factor in the birth of the village. The site of Falkland Castle now lies within the grounds of the present Falkland Palace. The donation of the royal hunting estate of Falkland by King Malcolm IV to Duncan Macduff, 6th Earl of Fife in 1160, may actually have led to any previous hunting lodge being replaced by the castle.[1]

Despite being granted royal burgh status in 1458, Falkland had developed as a mediæval settlement dependent on Falkland Palace and the Falkland Castle and therefore did not function in the same way as other royal burghs did.[1]

Falkland was the birthplace of the famous 17th century Covenanter Richard Cameron, who was the town schoolmaster before he became a field preacher. His house still stands in the main street of the village.

The Viscounts of Falkland were hereditary keepers of the Palace, and the Falkland Islands are named from Anthony Cary, 5th Viscount Falkland, who was First Lord of the Admiralty in 1690. 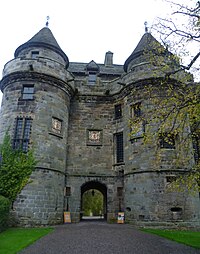 Falkland village is best known as the location of Falkland Palace, begun in 1500 by King James IV, and the best example of French-influenced Renaissance architecture in the United Kingdom. The palace was built to accommodate the royal Court when they came to Falkland to hunt in the nearby forests; Mary, Queen of Scots, was a frequent visitor.

As at Holyrood Palace in Edinburgh, a fire broke out during the occupation of the buildings by Oliver Cromwell's troops. The fire in 1654 destroyed the East Range. The Court never returned to Falkland Palace after 1665 and until the 19th century the village and palace were neglected. In the late 19th century extensive rebuilding and restoration work began. Today the palace and gardens are open to the public through the National Trust for Scotland.

Other features of the village include an old horse market, also including the Falkland Cricket Club, and the Falkland Golf Club. One of the country's leading environmental festivals, The Big Tent, is held in the grounds of Falkland Estate in July. Organised by the Falkland Centre for Stewardship the 2012 festival was headlined by the Proclaimers and the 2010 event by Rosanne Cash.